Yahoo Singapore released their 2020 Year in Review which dives into the most searched people, events, foods and brands in one of the most tumultuous years in the past century. It was a year defined by the COVID-19 pandemic, political upheavals, cultural change and tragic deaths.

According to the report, the past 50-odd weeks have kept netizens in Singapore glued to their devices in search of information, ideas, and opinions about the once-in-a-lifetime pandemic. From Singapore’s General Election, the royal members of Buckingham Palace, the Kardashian-Jenner family, to comfort food such as nasi lemak and bubble tea, these subjects have gripped Singaporeans as they adjusted to life under safe distancing restrictions and continued to seek out their passions.

Unsurprisingly, Singapore COVID-19 was the most searched news term in 2020 as users remain fixated on the pandemic; related searches such as the Singapore Budget 2020 (3rd) and Malaysia Lockdown (7th) also appeared on the list.

The tragic deaths of Kobe Bryant (4th) and George Floyd (9th), and the ongoing protests in Hong Kong (6th) underscored 2020 as a tumultuous year. 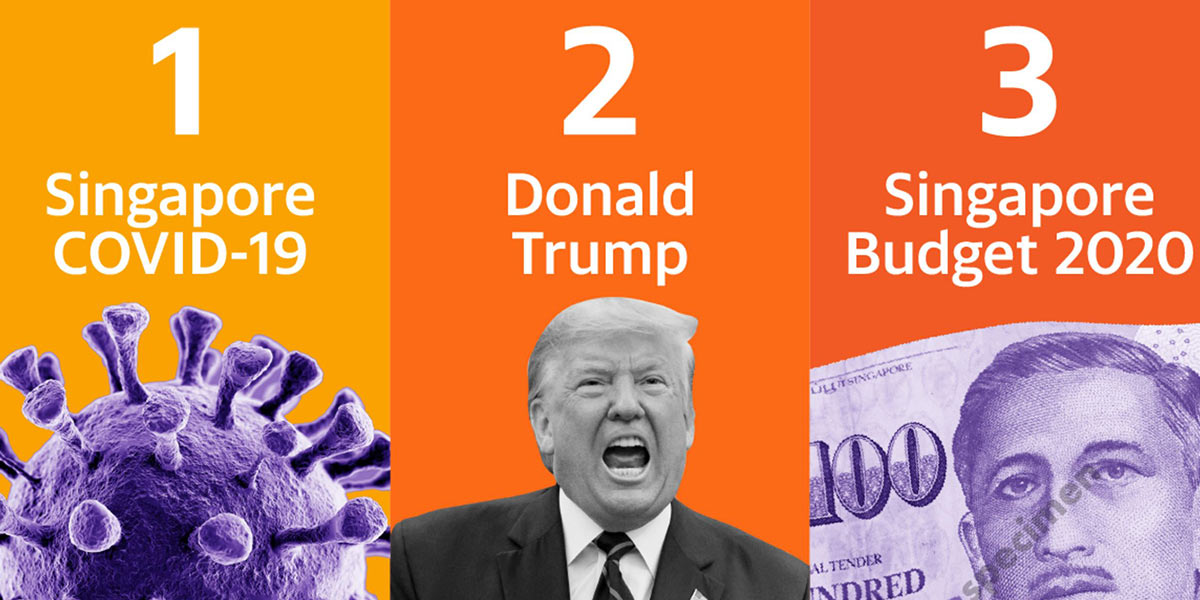 In 2020, Singapore held an election dominated by online campaigning with the absence of physical rallies due to safe distancing restrictions. Political parties mostly engaged voters online even as they conducted limited canvassing on the ground. The leading party candidates from various political parties made it to the top searches.

Prime Minister Lee Hsien Loong was the most searched politician this year as he sought to calm the nation in his addresses about the pandemic, testified in court over the libel suits filed by him, and remained in the news managing the dispute with his siblings over the 38 Oxley Road saga.

First-time Workers’ Party election candidate Jamus Lim (2nd) drew considerable attention for his eloquent speeches. Ivan Lim (3rd), the People’s Action Party’s prospective candidate, made the news for the wrong reasons after he withdrew his candidacy over allegations about his character. The other candidates who made the list were the founder of Peoples Voice Lim Tean (8th), and Dr. Chee Soon Juan (10th), the leader of the Singapore Democratic Party. 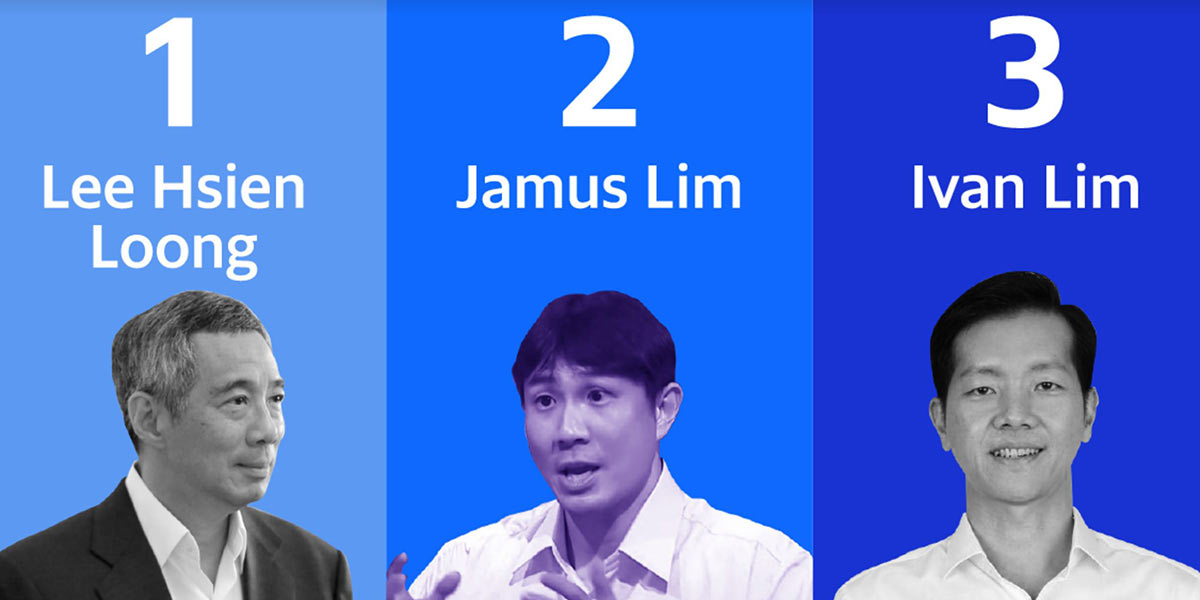 Most searched local celebrities: JJ Lin and Fann Wong rule at the top

JJ Lin, arguably Singapore’s most famous export in the Mandopop world, topped the list of most searched local male celebrities. Lawrence Wong, who has been making waves since his role in Yanxi Palace, showed up in 2nd. Mark Lee (7th) secured his spot on the list with his nomination for Best Actor at the prestigious Golden Horse Awards for his role in the local film, Number 1. 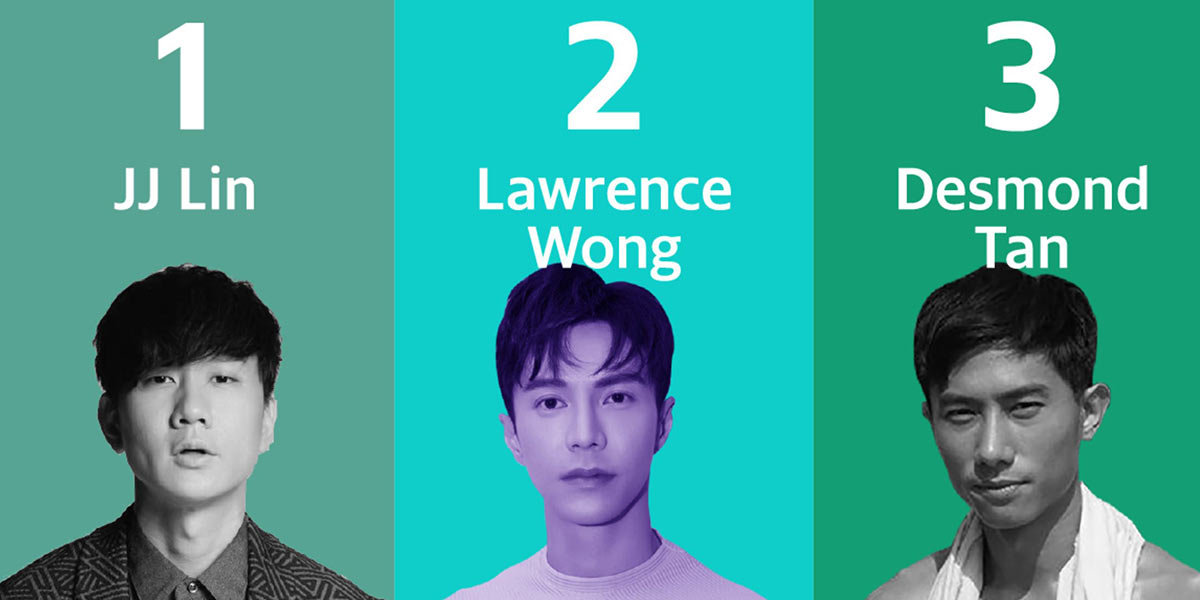 In the list of most searched local female celebrities, Fann Wong came in the top spot. TV and radio presenter, Jamie Yeo (2nd), rose in the list after she launched her jewelry label and entertained users with posts of her family. Socialite Jamie Chua (3rd) shared her luxe life and collection of branded goods. However, Chua caused a backlash after she posted insensitive comments about migrant workers. 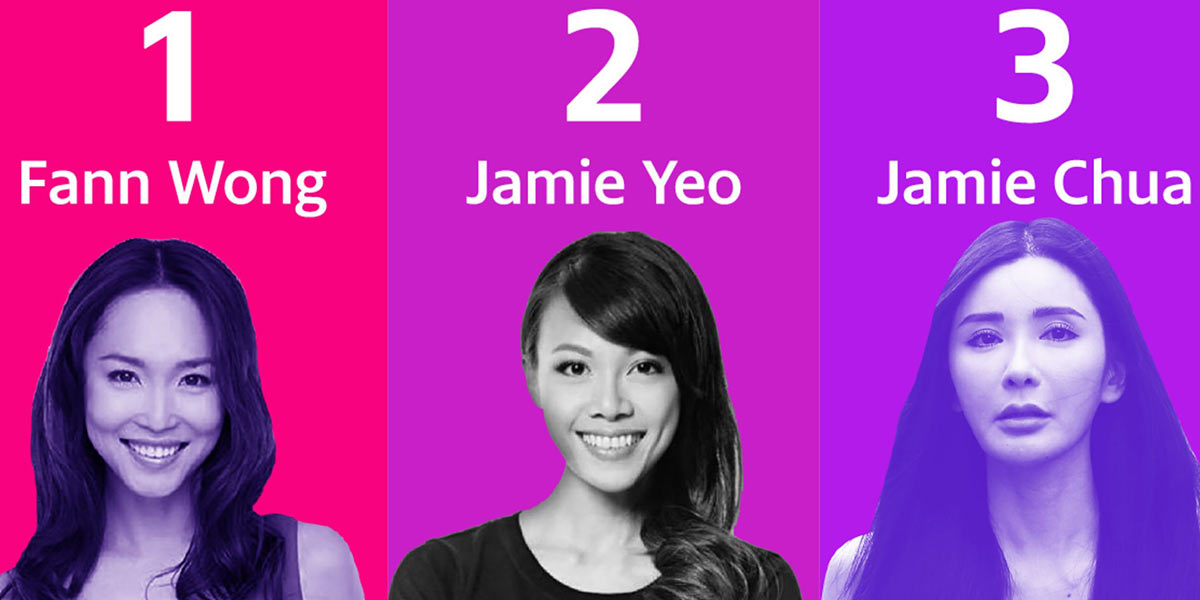 Asian celebrities were amongst the most searched male and female international celebrities this year. Stars of popular K-drama Crash Landing on You, Hyun Bin and Son Ye-Jin came in first amongst the males and fourth amongst the females respectively. Other Asian celebrities included Lee Min-ho (3rd) and Aaron Kwok (4th) for male international celebrities, and Kim Chiu (6th) in the female category. Grief over young icons gone too soon, such as the deaths of Taiwanese celebrity Alien Huang (2nd), and Bollywood actor Sushant Singh Rajput (7th), triggered significant online interest.

Most searched movies and TV shows: K-wave surges in Singapore

South Korean movies and series filled nine out of 10 of the most searched movies and TV shows in Singapore, with the Hollywood remake of Mulan (5th) making an appearance. Popular South Korean series Crash Landing on You and The World of the Married clinched the top two spots, with Oscar-winning film Parasite rounding up the top three. South Korean variety show Running Man (4th) continues to be among the top searches, beating newer television series such as The King: Eternal Monarch, Itaewon Class, Kingdom, Ever Night, and Dr. Romantic 2, with the latter four ranking from sixth to tenth place respectively. 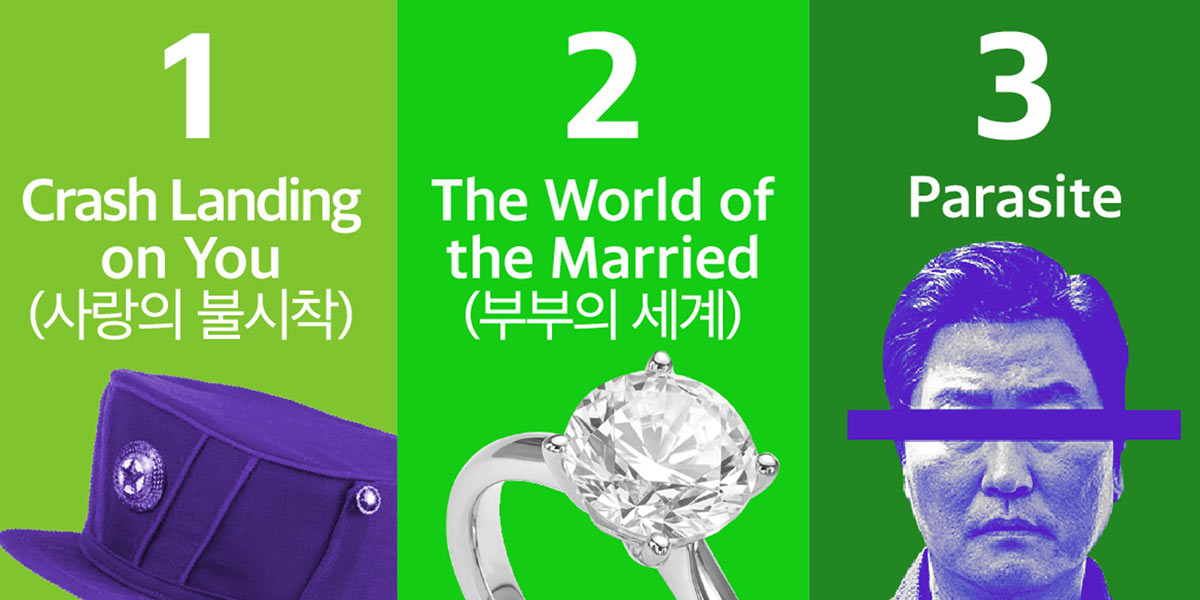 Despite spending more time in their homes this year, people in Singapore remained eager to invest in their appearance. Sephora topped the list for most searched beauty brands in 2020. Reflecting an emerging trend amongst Singapore online shoppers for clean beauty and ethically-sourced products, The Body Shop made the list at number 2, while brow and lash grooming salon Browhaus ranked eighth as people adopted mask-friendly beauty trends that accentuate the eyes. Fascination with all-things Korean transcended off-screen as Singapore netizens went in search of K-beauty brands Innisfree (3rd), Sulwhasoo (7th), and Etude House (9th), riding the surging K-wave popularity across the island. 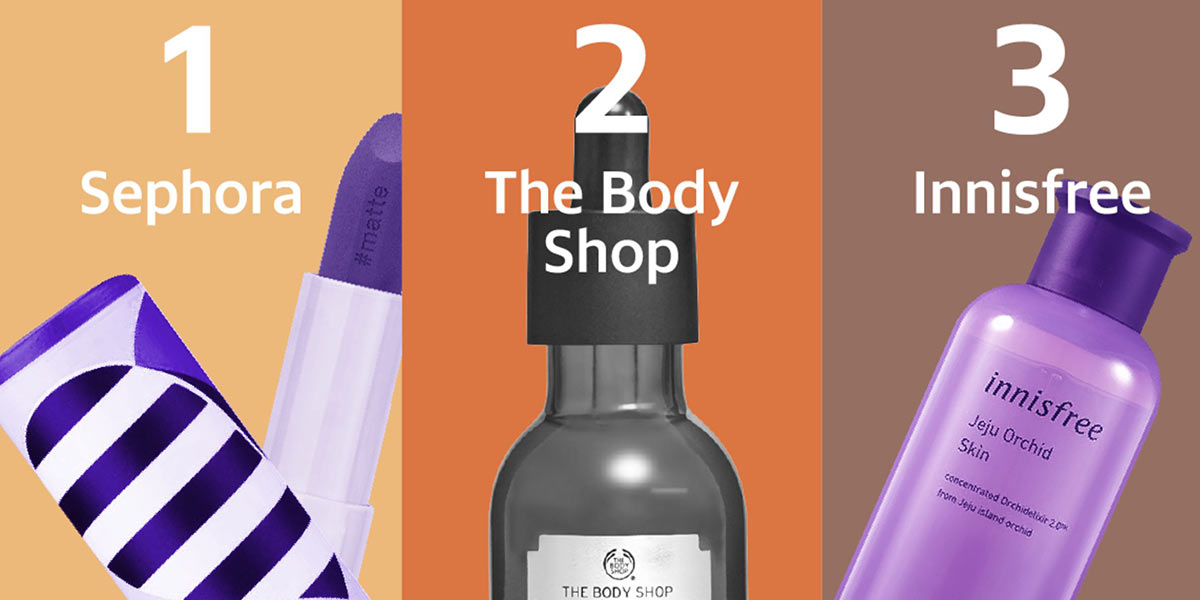 Eating is a Singaporean national pastime. As Singaporeans continued to be deprived of traveling, local delicacies took over the top searches, taking seven spots out of the Top 10 list. Nasi lemak emerged as the most searched, followed by dim sum. There seems to be no end to the bubble tea craze, coming in third, as evident during the mad rush for bubble tea before and after the circuit breaker. Dalgona coffee (4th) has been trending across the world and in Singapore.

Notably, aglio olio (10th) was the only non-local food item that made the list this year. 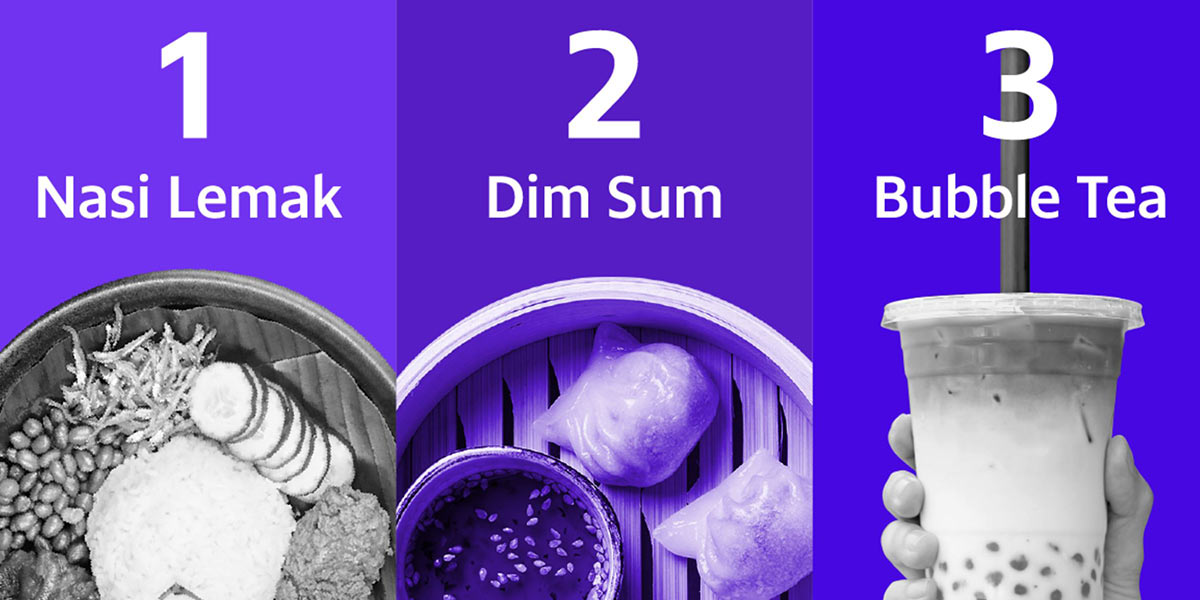 As events were canceled and postponed due to the pandemic, sporting events that continue to be staged were top-of-mind for users in Singapore with football, basketball, and tennis dominating the most searched events list. Popular searches include the English Premier League (1st), NBA (3rd), UEFA Champions League (5th), FA Cup (8th), and the Australian Open (6th), French Open (9th) and US Open (10th).

Election fever gripped readers with the United States Presidential Elections (2nd) and the 2020 Singapore General Elections (4th) making it to the Top 10 list. Despite a much scaled-down National Day Parade (7th), the annual event to rally the nation remained a subject of great interest among users.

GE2020 and high profile court cases were all-consuming topics in Singapore in a year dominated by the pandemic.

The stunning win by WP’s Sengkang GRC team was picked by Yahoo editors as the top event in GE 2020. PM Lee Hsien Loong, leader of the opposition Pritam Singh, and political veteran Tan Cheng Bock were the leading figures who made an impact in GE 2020.

Among the top picks of the biggest court dramas by Yahoo editors were the Parti Liyani case, Lee Suet Fern, who was suspended for 15 months over the handling of Lee Kuan Yew’s will, and PM Lee’s defamation suits against Leong Sze Hian and The Online Citizen chief editor Terry Xu, the man who was sentenced to death for murdering his wife and child in Woodlands, and a molest case involving a Singapore Management University student.

For the biggest moments online and other surprises from the year, take a detailed look at Yahoo’s Year in Review 2020. More top picks and listings, such as the Top 10 Key Figures of GE 2020, Top 10 Court Cases that got Singapore’s attention, and the Biggest Celebrity Controversies of 2020, will be revealed from 7 December to 10 January.