Use of Digital Video Ads in Australia for Brand Building Rises

Creative was identified in the report as a critical contributor to campaign success, yet 46% of agencies rarely or never develop digital video advertising creative for a specific media environment.

According to research released today by IAB Australia, brand building is one of the key drivers of the rapidly expanding digital video market. The 2022 IAB Australian Video State of the Nation Report also found 74% of buyers are continuing to invest or increasing their investment in digital video ad formats as a way of expanding the reach of their TV campaigns.

According to the IAB Online Advertising Expenditure Report produced by PWC, Australian advertisers spent nearly $2.9 billion on digital video advertising in 2021 with expenditure increasing 48% on the prior year, a growth rate not seen since 2016.

As well as the overall trend towards increased investment, the Report found that the breadth of video ad formats and environments being embraced by buyers is expanding, with more than half of the respondents using the most popular eleven formats.

The Report added that agencies are expanding their measurement toolkit and moving toward sustainable measurement techniques – including increased use of market mix modeling which has increased significantly since the last survey (from 32% to 47%) and brand lift studies. 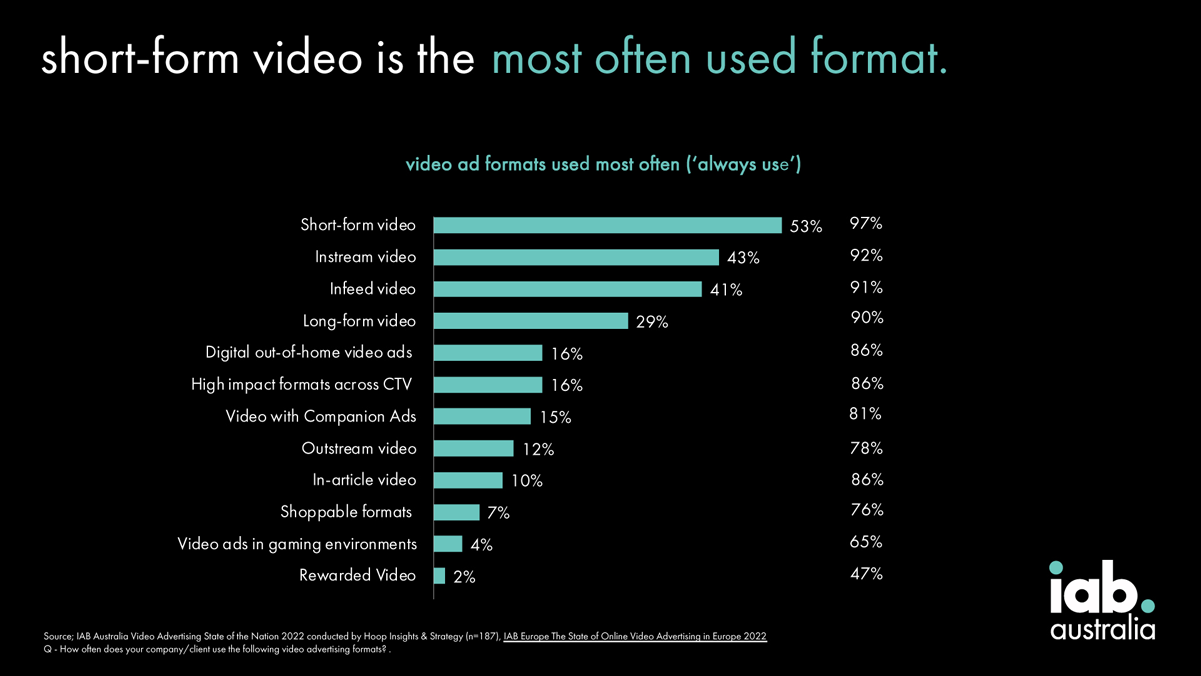 There has additionally been a decrease in the use of multi-touch attribution modeling due to the increasing challenges to the accuracy of this technique from the reduction in signals including from third-party cookies.

Despite these advances, the report found that the number of marketers yet to take steps towards people-based marketing remains unchanged since 2021 at 36%, despite it enabling planning, activating, and measuring interactions across the media when third party cookies are no long available to be used.

Cross-screen measurement for both media planning and campaign delivery was identified as a key issue challenging the industry.

“This along with changes to tracking and privacy is resulting in a wider range of measurement techniques being introduced which is positive news. However, the wider range of formats and environments being used is making the development of fit for purpose creative challenging.”

Creative was identified in the report as a critical contributor to campaign success, yet 46% of agencies rarely or never develop digital video advertising creative for a specific media environment.

The 2022 IAB Australian Video State of the Nation Report was conducted by an independent research company, Hoop Research Group.  Fieldwork was conducted during March and April 2022 with 187 advertising decision makers from agencies including trading desks and DSPs participated.