A new report from Twitter revealed the most popular Singaporean tweets and hashtags of a very tumultuous 2020.

People used Twitter to try and change the world, help others, to encourage them, inspire them, or just make them laugh. They even used Twitter to promote businesses that needed a little boost to stay afloat.

As far as trends go, the BTS ARMY continued to dominate and enjoy new music (#BTS), and football fans rejoiced in the return of the UEFA Champions League (#UCL) after an extended break.

Most Engaged Tweets in Singapore

Be it surprise animal sightings in the neighborhood, visiting world-famous Changi Airport, or delivery riders who enthusiastically fulfill special requests to pass messages of love, Singaporeans have been kept connected and entertained throughout the year.

no one:
changi airport toilets : https://t.co/Ct334YjNkn

Working as a Deliveroo rider and i got a special request from a customer to say ‘i love you’ to her bf. Okay la, gf happy, bf happy. Everyone’s happy. You request, i do for you la #Deliveroo #EssentialWorkers pic.twitter.com/mmvxsOBLSU

Other popular Tweets in Singapore that drove conversation

From delivery riders who spontaneously join in our National Day Parade, to empty supermarket shelves and cats who disobey circuit breaker rules, it has truly been a roller-coaster year. These are some of the tweets that drove conversation.

my dinner for tonight cus all the aunties emptied out ntuc

can we make a thread where cats are being a rebel and not following the CB rules pic.twitter.com/E6OWZL2ZXz

Most Tweeted about hashtags in Singapore

Unsurprisingly, #covid19 is Singapore’s top hashtag has many turned to Twitter for updates on developments and to share their thoughts on the situation. #covid19 (and other variations on it) was Tweeted nearly 400 million times globally, and it also changed the way we talked about so many other topics.

“The challenging circumstances of 2020 have highlighted Twitter’s role in driving real-time conversations and facilitating the interactions that matter as Singaporeans bonded over heartwarming and key moments of the year.”

While 2020 saw more serious moments in Singapore’s history like the #ge2020 in July; people also tried to find their own source of indoor entertainment; sending #animalcrossing and #granbluefantasy into the top 5 most Tweeted about hashtags in the country. 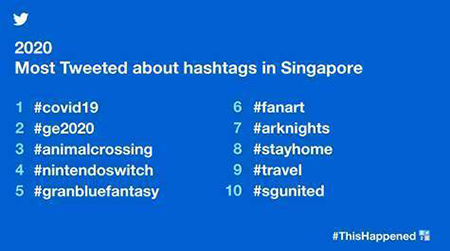 #covid19
The coronavirus has drastically altered life as we know it and as the global pandemic forced countries including Singapore into various levels of lockdowns and social distancing measures, many have used the hashtag to find prompt news updates and engage with one another.

#ge2020
Amidst a global pandemic, this year’s election was a hotly contested affair with political debates and discussions taking place on social media. Unlike previous years with real-life speeches and physical rallies, GE2020 was characterized by more online chatter and conversations.

#animalcrossing
A social simulation video game, Animal Crossings provided many with an escape and opportunity to interact with friends and family regardless of location. Modeled after an idyllic village, players participated in everyday activities like gardening and socializing.

#nintendoswitch
Turning to video games to pass time and stay in touch with friends and family, many people in Singapore relied heavily on the Nintendo Switch console. In addition to Animal Crossing, other popular games among Singaporeans include Mario Kart, Pokemon, and The Legend of Zelda.

Most Tweeted about Accounts in Singapore

Personalities like @tzehern_ and @JoakimGomez regularly made the best of the Covid situation by posting light-hearted content, while @mrbrown shared his honest thoughts and commentary on various social issues throughout the year.

Additionally, when #GE2020 happened in July, many flocked to Twitter to discuss politics, resulting in @RaeesahKhanwpsg from The Workers’ Party and Prime Minister @leehsienloong from People’s Action Party making it to the list of the topmost Tweeted accounts. 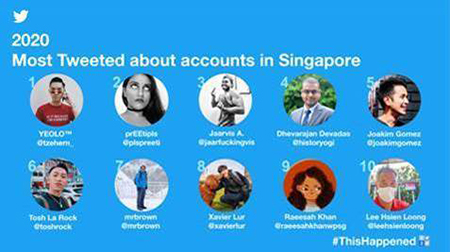 Most Tweeted about K-Pop Groups in Singapore

A global phenomenon, K-pop has seen a meteoric rise in the last decade and cancelations of concert tours this year have done little to dull the shine. With major virtual events like #bangbangcon and online concert MAP OF THE SOUL ON:E igniting excitement from their massive ARMY, BTS (@BTS_twt) comes in first as the most talked-about K-pop act in Singapore.

As EXO (@weareoneEXO) members explored solo and sub-unit projects, chatter from their fans propelled them to second place. Coming in third is Seventeen (@pledis_17), who both created new music and gave a behind the scenes look into their “Ode to You” tour with a documentary. In fourth place is ATEEZ (@ATEEZofficial) who held a virtual meet-and-greet with fans after performing at KCON:TACT2020 and finally, taking part in an online concert as part of SM Entertainment’s Beyond Live series, NCT 127 (@NCTsmtown_127) takes the fifth spot. 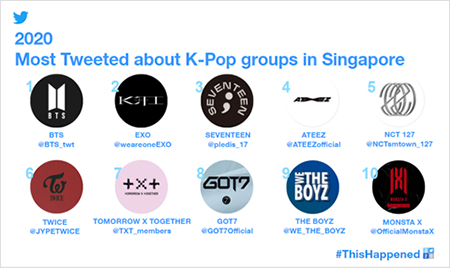 Most Tweeted about Sports Accounts in Singapore

Even though most sports went on hiatus and looked a bit different when they did eventually return, there were 2 billion Tweets globally about sports. The most-watched sport in Singapore, football fever returned after leagues were put on hold for many months. As the Premier League (@premierleague) and Champions League (#UCL) eventually resumed and crowned their winners, fans eagerly anticipated the start of the next season, which began in September.

Clinching the Premier League title in June, Liverpool Football Club (@LFC) was once again the most discussed team in Singapore, followed closely by Manchester United (@ManUtd). Arsenal (@Arsenal) came in third as fans welcomed the return of former player Mikel Arteta as a manager, who has joined a growing list of player-turned managers that also includes Chelsea’s (@ChelseaFC) Frank Lampard. 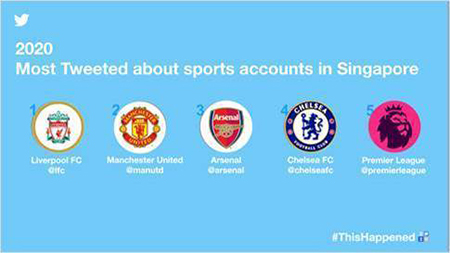 Most Tweeted about emojis in Singapore

2020 has been a year of ups and downs and the most used emojis in Singapore reflect the roller-coaster of emotions this year has been. 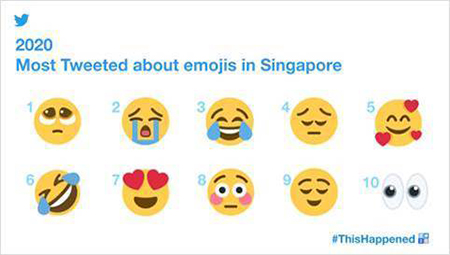 “This year, people have used Twitter not just to keep up with what’s happening around the world, but to maintain connections with one another despite being apart,” said Arvinder Gujral, Managing Director, Southeast Asia, at Twitter.

“The challenging circumstances of 2020 have highlighted Twitter’s role in driving real-time conversations and facilitating the interactions that matter as Singaporeans bonded over heartwarming and key moments of the year. As we enter 2021, it’s clear that Twitter is the only place for the buzziest, funniest, most interesting, and most relevant culture moments, and we expect this to continue moving forward.”

Fans can check out @TwitterSG which will spotlight the top Twitter moments from the year.