The Insects Are Recycling in New Coke Ad – It’s the Least You Could do to Pitch in, Too

Coca-Cola Australia has launched a new campaign via Ogilvy Sydney that comes following an announcement earlier this year that 7 out of 10 of Coca-Cola’s range of drink bottles in Australia will be 100% recycled plastic by the end of this year.

The campaign is led by a 30-second film that shows a determined ladybug – eventually along with the help of some ants – trying to do its part to contribute to creating a cleaner world.

It does offer a subtle message, at least in our eyes, that hey, if these insects can take time out of their busy day and team up to recycle, then damn it, so can you. Get with it.

The insects chipping in does tie in nicely with the tagline “With a little help, we can make a big change.” As it does with the stated aim of the campaign to thank Australians for recycling.

We at Branding in Asia would like to extend our gratitude to the insects as well.

According to the brand, Australia will be the first country in the world where all Coca-Cola Classic bottles, 600ml and under, will be made from 100% recycled plastic on an ongoing basis.

“We are the largest drinks company in Australia and we have a responsibility to help solve the packaging problem,” said Christine Black, director for sustainability, Coca-Cola Australia.

“Coca-Cola in Australia has made a significant commitment to investing in recycled plastic but there is more to do. Australians help every time they recycle a drink bottle.

“When a company as large as Coca-Cola combines our marketing expertise to encourage recycling with a commitment to using recycled plastic, our plastic bottles can become bottles again and again.” 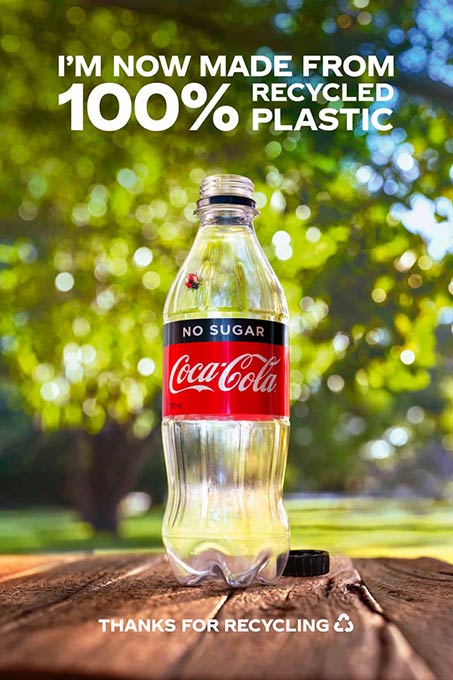