A local participant in the campaign.

Set Wet recently put on the biggest ever-styling event in Nepal to connect with the youth through style. Their inspiration came from the basic insight of the “Importance of Grooming”.

According to a release:

There’s a saying, “Don’t Judge a Book by Its Cover”, but the fact is people do make decisions, judge the other person, and have a perceived view within 30 seconds of their first meet. Due to this fact, arises the aspiration to look stylish, modern and good looking.

The Set Wet Style Brigade (Crew) approached youngsters in various locations all over Kathmandu Valley such as Colleges, Malls and Hotspots, which instigated Nepal’s Biggest Styling Event. In a short period of just over 3 weeks they have styled over 10,000 guys in the Valley using professional hairstylist. 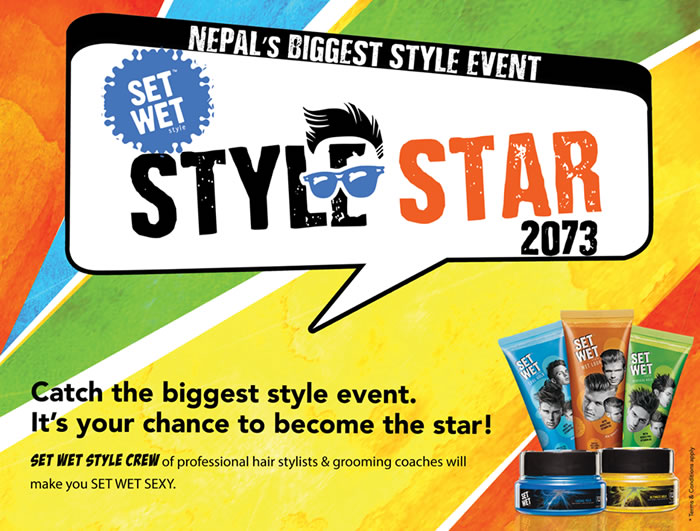 But they didn’t just stop there. Set Wet took a step beyond styling. They wanted to give the youth a reason to take better care of themselves and they did it by offering colleges personality development training to their students by well-known life skill coach and trainers.

Parallel to the ace performance on the ground level activity, they further amplified the ground level excitement on to the digital platform by giving the youngsters a chance to become the Face of Set Wet. An opportunity for them to be the endorser of the brand by winning an online competition on Set Wet Nepal Facebook page. The chosen three winners will be featured across print and digital media platforms.

The campaign conceptualized by their agency partner Outreach Nepal has managed to create a brilliant mix of education, entertainment and excitement, and also received the acceptance and recognition the campaign deserved from Nepal’s youth.

The campaign also included Nepal’s Largest Flash mob held in Patan Durbar Square a historic location with its unique beauty, which was gravely affected with the earthquake the previous year was filled with cheers and applause once again. People were mesmerized with the flash mob consisting of over 50 dancers making this the largest flash mob Nepal had ever seen.

“Set Wet Style Star 2073” has made a huge imprint on people’s mind and has unfolded a new outlook towards marketing communication which combines unconventional approach to run a successful campaign with more focus activities around the combination of consumer activations & digital. The campaign is just half way through and is aiming to directly style 20000+ people at the ground level.

Barista Bros: So Good, Catfish Will Buy it at the Store