Masako is Executive Creative Director at Dentsu One Manila.

Trailblazer, creative powerhouse, globetrotter, and sake sommelier, Masako Okamura famously became Dentsu’s first female Creative Director in 2001. Since then, she has continued to shake up the industry – first joining Dentsu Vietnam in 2014 to raise the agency’s creative standards there, before relocating to ASPAC in the Philippines in 2017.

Dentsu acquired ASPAC in 2015, and this year, ASPAC rebranded as Dentsu One Manila, with Masako overseeing the agency’s Japanese accounts as Executive Creative Director. Currently based in Tokyo as a result of COVID-19 travel restrictions, Masako is wearing two hats as ECD at Dentsu One Manila, while also working for clients of Dentsu Tokyo.

Barbara Messer recently spoke to her about her role at Dentsu One Manila, and her upcoming role on the Ad Stars 2020 jury.

You became Dentsu’s first-ever female creative director in 2001. Do you think you bring a different approach to creative leadership as a woman?

Well, now I can say ‘yes’. At first, I tried to use the same approach as Japanese men: have a well-organized, top-down operation, like an army. But one day I instinctively felt I had to change all that. I found I was drawn into personal stories. I started to welcome staff with different backgrounds, such as architectural or physics graduates and sometimes ex-musicians – my major was law by the way.

During my time in Vietnam and the Philippines, I hired creatives of different nationalities as well as the LGBTQ community. This has made me a more malleable person, able to accept different opinions wherever they come from. Landlord-style leadership?

Last week, I finished co-authoring a Korean book, titled “커리어 대작전 (Career Operations)”. It details the various ups and downs of when I became CD as well as what it really means to be a female creative. If you’re interested, please give it a read, but I’m afraid it’s only available in Korean.

In 2014, you moved to Vietnam to lead Dentsu’s creative department. How did living there shape you as a creative leader?

I had wanted to work overseas for a long time, and right at the point I almost gave it all up, Ted Lim, our former CCO of Dentsu APAC, called me about an opportunity in Vietnam. I said ‘Yes’ without a moment’s hesitation, even though I knew nothing about the industry in Vietnam. Living in Vietnam taught me a lot.

“We now need to reconsider ‘What is brand value?’ and even ‘Do we need this service or product for the future?’ In actual fact, some potential clients have asked me to think about how to use creativity to invent new business for them, rather than use ‘creative’ ideas to develop one line of business.”

How to lead a creative team includes having to know everyone’s domestic circumstances, taking care of medical expenses, arranging BBQs at the client’s place as well as overseeing the agency’s balance sheet. I learned how to run a company, something I could never have done in Dentsu Tokyo. Ha! As a leader, for me, the toughest, but also the most noteworthy part of the role, was the battle over censorship with the communist party.

When you moved to the Philippines in 2017, you described it as a “hotbed” for world-class talent. Why were you eager to work there?

During my trips to the Philippines, I appreciated the openness and warmth of the Filipinos. Philippines 4A invited me to join the jury for local award shows such as Kidlat and Boomerang. I realized I was in a “hotbed” when I met the likes of David Guerrero, Melvin Mangada, and Merlee Jayme there – I’d previously only met them in New York or Cannes. It was really inspiring to talk with them about the real work that goes on in the Philippines.

What is the biggest challenge or opportunity you face this year?

For me, the challenge is to “molt” from the present me. During the COVID-19 pandemic, the so-called “Creative” was suddenly democratized. Everyone had to stay at home, and so tried to make digital contents based on the same issue, via YouTube or TikTok. This has, as a result, muddied the border between professional and amateur. I’m also afraid this pandemic will change consumer spending habits for the long term.

At first, I tried to use the same approach as Japanese men: have a well-organized, top-down operation, like an army. But one day I instinctively felt I had to change all that.

“At first, I tried to use the same approach as Japanese men: have a well-organized, top-down operation, like an army. But one day I instinctively felt I had to change all that. “

We now need to reconsider “What is brand value?” and even “Do we need this service or product for the future?” In actual fact, some potential clients have asked me to think about how to use creativity to invent new business for them, rather than use ‘creative’ ideas to develop one line of business.

About the biggest opportunities, this is where to work from. I’ve been wondering if I can work from Georgia, Estonia, or another ex-Soviet country. Basically, as long as the Wi-Fi connection is good and there is excellent coffee and wine, I’m set. Seriously!

ASPAC recently rebranded as Dentsu One Manila. How will the rebrand impact your role or goals for the agency?

The transition from ASPAC to Dentsu One Manila is going smoothly and we have some great new members of the agency for Filipino clients. So, I can concentrate on Japanese clients in the Philippines. Dentsu One Manila is a digital-led agency designed to answer the changing needs of clients during the markets’ move toward normalcy. It offers business solutions working closely with our sister agencies across the Dentsu Aegis Network worldwide and Dentsu Inc. Japan under the “one dentsu” philosophy.

Thanks to ‘Working From Home’, I can work for any country from Tokyo and have just started working for clients of Dentsu Tokyo. Therefore, I have dual roles in the Filipino and Japanese markets. By the way, 98% of my belongings are still at my condo in Manila. If anyone is close to President Duterte, please ask him to allow me to come back and collect them!

What have been your biggest achievements since moving to Manila?

To show appreciation for its true customers, the ordinary laborers, we created Labels of Unsung Heroes: Ginebra Ako (I am Ginebra). We reimaged the iconic Ginebra label as depicting the ‘workers’ such as farmers, carpenters, and porters as courageous ‘unsung heroes’. Over 30 ‘heroes’ labels were produced. We also made a music video, ‘Tagay’, to help support it. By rebranding, Ginebra has since gained new customers.

Being recognized at local and international award shows, ASPAC was able to climb a few rungs on the creative rankings ladder.

Now I am working in Tokyo and, continuing the same theme. My team in Manila released a great new artwork, “Ginebra Frontliner Labels”. This time, Ginebra portrayed today’s frontline heroes who are risking their health and lives to save others in the worldwide battle against COVID-19. This went viral, so Ginebra decided to mass-produce it. The copy, “para sa tunay na tapang” (“For Real Courage”), is the catchphrase used in the ‘Tagay’ music video, too. 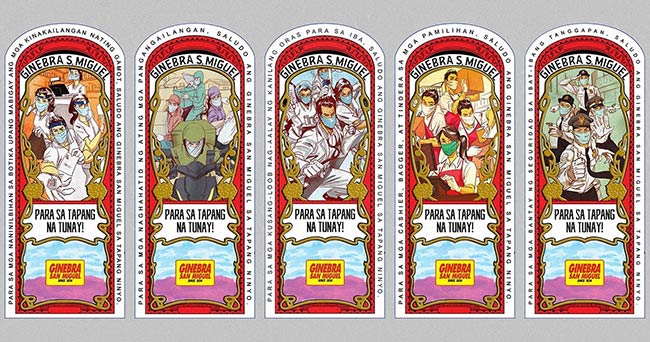 What kind of kid were you: studious, curious, creative, cheeky??

Curious and creative – a bit of a social geek. When I was seven years old, I pleaded to read the Lupin and Sherlock Holmes detective series, but my parents told me, “Well, we can’t afford them. Any ideas?” I then asked my classmates to each buy a different book, which meant we ended up with a complete private detective ‘library’ for the class. Of course, I got approval from the homeroom teacher first.

Eventually, all the students could use the library I made.

Is it true you are a sake sommelier?

Yes, I am a licensed sake sommelier. When I’m jurying at an international awards-show, there are often visits to Japanese restaurants and I’m always asked what kind of sake I recommend and why. In such situations, I’m the only Japanese person around so my answer could be said to represent the whole of Japan.

I, therefore, challenged myself to attend night school to become KIKIZAKESHI, or sake sommelier, to avoid any awkward moments. I love junmai-shu, which is a pure-rice sake made without any added alcohol or sugar. I can suggest the perfect sake partner for any meal, if you like!

Have you made any interesting discoveries this year?

How to make a good coffee. When abnormal becomes the new normal, maintaining peace of mind is a bit tricky. We need to think of new ways to deal with the same daily routines of life: interfacing with our Mac, smartphone, or tablet screen and family. In order to refresh our overworking brains, offering it an excellent dose of coffee is a ritual that has become essential to life for me. I recently switched my coffee things from Kalita to Halio – the hand drip style.

As for coffee beans I like Geisha, which is the highest grade of coffee. I am really into Panama Geisha, which has the right bitterness and Earl Grey-ish aroma.

You are joining the Final Jury at AD STARS 2020. What are you most looking forward to?

As you may know, there is no Ad Fest, Cannes or Spikes this year. Ad Stars might be the first big advertising awards show in the region. I’m looking forward to seeing really fresh, avant-garde work, especially from the new “Pivot” category for COVID-19 innovations as I want to see the power of professional creativity. I’d love to visit Busan in October if possible. Fingers crossed.