PVP Esports has unveiled the festival program for virtual gaming & esports festival and awards show, SuperGamerFest. Hosted by gamers based in Singapore – local musician and DOTA fanatic Sezairi and host and streamer Victoria Cheng – the 5-day festival will include celebrity showdowns, esports fun, exclusive interviews, and the inaugural SuperGamerFest Awards.

Beyond the live Festival program, fans can also look forward to bite-sized content available on-demand on the SGF microsite curated specially for gamers and esports enthusiasts, featuring interviews with industry professionals, educational content, wellness talks, and behind-the-scenes footage of esports teams from around the world.

The Regional Grand Finals of the PVP Esports Community Championships 2020: Season 2 will include champions from across eight countries competing in the Open and Campus categories.

There will be interviews with back-to-back The International champions OG and CEO of Team Secret, John Yao. Twitch Co-Founder Kevin Lin will also speak for the first time since his departure from the company and Red Bull Racing F1 Driver Alex Albon will share the impact gaming has had on his life.

SGF host Sezairi will catch up with players from OG as they share their triumphs and struggles as professional esports players competing at the highest level for Dota 2. John Yao, CEO of one of the world’s largest esports organizations Team Secret, will also be interviewed as he provides an insider’s look into the esports industry and offers advice for those who are keen to enter the industry as professionals.

Saturday will see celebrity showdowns, featuring regional top-tier streamers and gaming influencers with a combined social following of 39 million across SEA. Celebrities from the region will take on popular games Among Us and Human: Fall Flat.

The SuperGamerFest Awards is Southeast Asia’s first regional gaming content and esports awards created to celebrate the achievements and passions of creators and esports professionals. After a month of fan nominations and a rigorous judging process that included quantitative analysis of all nominees, the shortlisted nominees across the region have been selected and will be revealed on PVP Esports’ Facebook page from Friday, 27 November 2020.

As part of the SGF Awards show on Saturday 12 December, the evening will feature special guest performers SGAG – Singapore’s homegrown comedy platform, Australian YouTuber Wendy ‘Wengie’ Huang, and additional special appearances from guests from the world of sports and entertainment.

A repository of content on-demand for fans will also be exclusively available on the SuperGamerFest 2020 microsite. This includes interviews with industry stalwarts: former VP of the Houston Rockets’ esports team Clutch Gaming Sebastian Park – also known as the first dedicated esports front-office executive in North America and in the NBA; EVOS founder Hartman Harris sharing his thoughts on the future of esports in SEA and Dota 2 coach from SK Telecom’s T1 – Park “March” Tae-won.

Available on demand at pvpesports.gg/supergamer2020 from 5 – 13 December 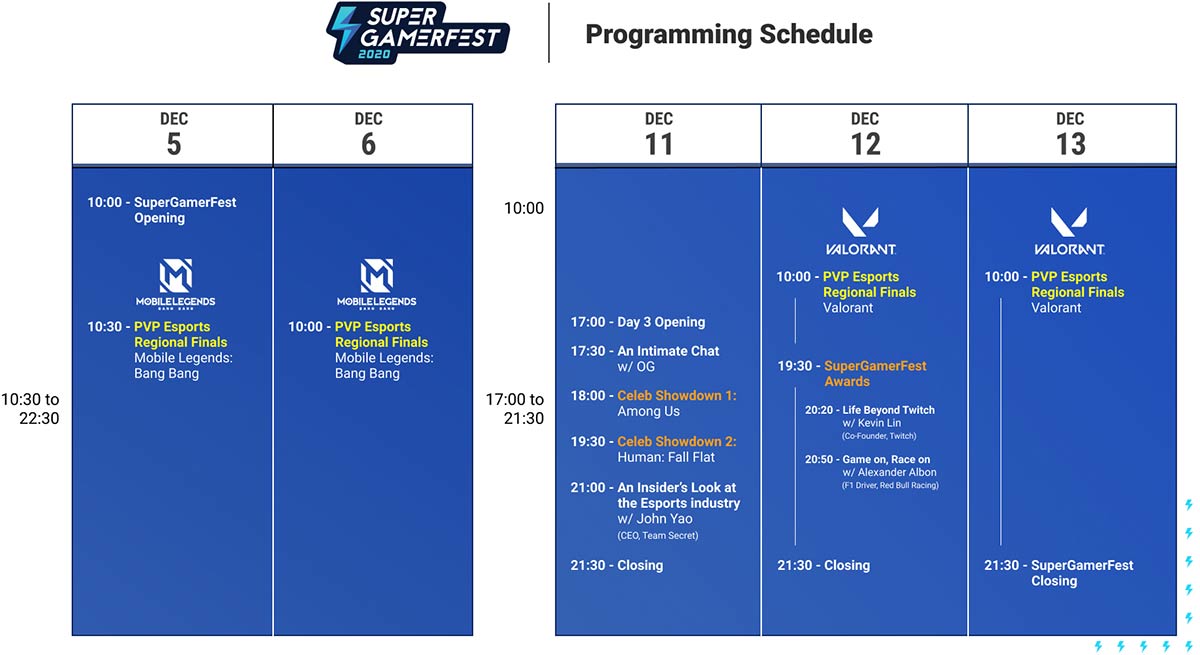 Throughout the Festival, there will be exclusive industry announcements, plus a variety of pre-event and on-stream contests where fans can win limited-edition prizes such as the Huawei Nova 7SE, Freebuds Pro and Watch FIT, GSP 601 and GSP 602 Professional Gaming Headsets by EPOS Audio and gaming peripherals from gaming hardware firm XTRFY.

Admission to SGF is free. For more information on the Festival and to watch the SuperGamerFest 2020, please visit pvpesports.gg/supergamer2020.