The 2022 report found consumers looking for businesses to take on a larger role on key issues including climate change, racial injustice, and economic inequality says the latest survey.

The Edelman Trust Barometer is out for 2022 and reveals that businesses hold onto their position “as the most trusted institution, with even greater expectations due to the government’s failure to lead during the pandemic,” according to Edelman’s findings.

By an average of five-to-one margin, respondents in the 28 countries surveyed look to business to play a larger role in climate change, economic inequality, workforce reskilling, and addressing racial injustice.

People are looking to brands to fill the void, with nearly 60 percent of consumers buying from brands based on their values and beliefs. The Trsut Barometer additionally found that almost 6 in 10 employees choose a workplace based on shared values and expect their CEO to take a stand on societal issues, with 64 percent of investors looking to back businesses aligned with their values.

“Business must now be the stabilizing force delivering tangible action and results on society’s most critical issues,” said Richard Edelman, CEO of Edelman. “Societal leadership is now a core function of business.”

The growing consumer trust gap between government and brands

Business further distanced itself from government, says Edelman, outscoring it by 53 points on competence and 26 points on ethics. More than 8 in 10 respondents want CEOs to be the face of change, leading on policy, not on politics.

This year’s report reveals what the report describes as “a vicious cycle of distrust fueled by government and media” globally, with a majority of people believing they are being lied to by journalists (67 percent, up 8 points) and government leaders (66 percent, up 9 points), and nearly one out of every two respondents view government (48 percent) and media (46 percent) as divisive forces in society.

“It’s a death grip where media is chasing clicks and government is chasing votes, both feeding a cycle of disinformation and division and exploiting it for commercial and political gain.” 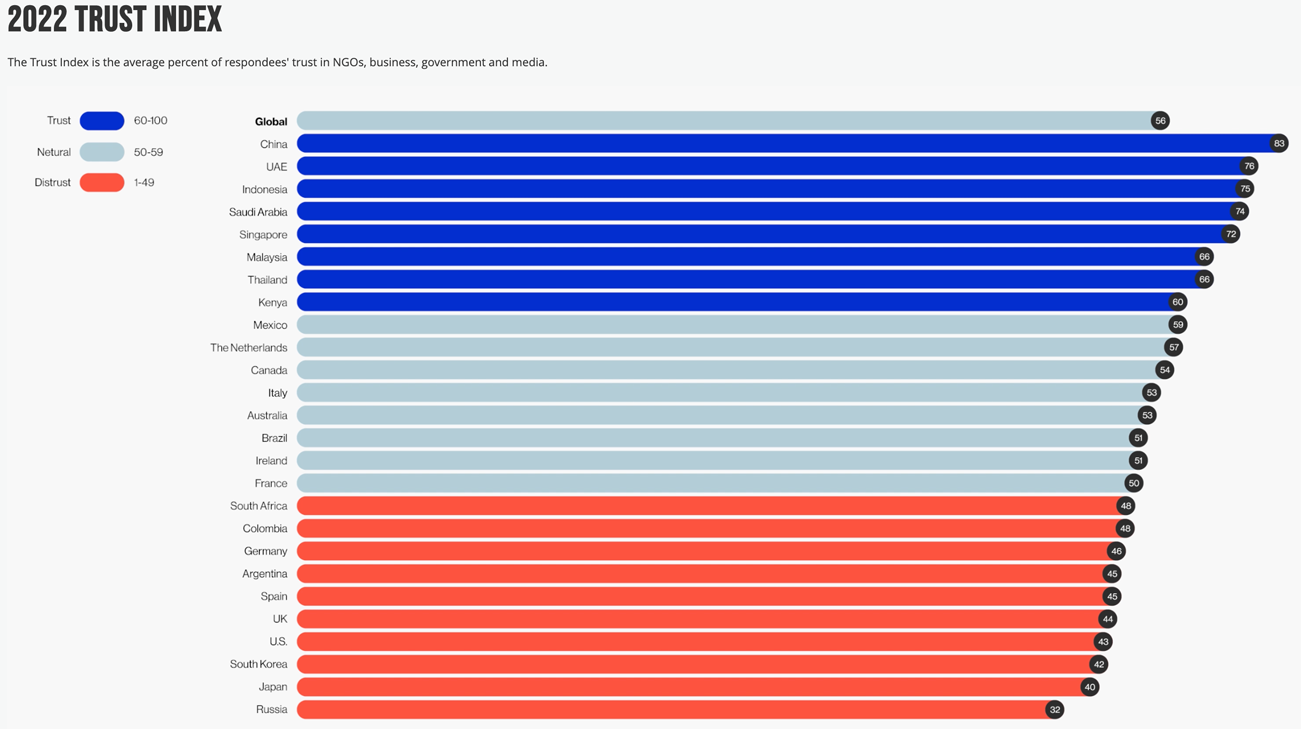 Contrast that to the trust jumps in non-democratic countries—China (83) and the UAE (76), which saw increases of 11 and 9 points respectively.

The disparity is particularly notable by the record 40-point gap between China and the U.S. with the report commenting that “respondents in every developed country studied believe they will be worse off financially in five years and 85 percent fear they will lose their jobs to forces including automation.”

“Restoring trust is going to require business to continue its societal role.”

Edelman adds that “distrust has become the default,” with the majority of respondents (59 percent) saying they tend to distrust until seeing evidence that something is trustworthy, and 64 percent believing people in their country lack the ability to have constructive and civil debates.

“But even more, it will require all institutions to demonstrate tangible progress and restore belief in society’s ability to build a better future for all, focus on long-term thinking over short-term benefits and provide trustworthy, fact-based information.”

You can read the full report here.