Just as some people are more friendly than others, so it stands that some countries will be more warm and welcoming to you as an expat than others will. So, what are the friendliest places to get your passport stamped and spend some quality time in?

According to a survey of more than 14,000 respondents from 67 countries by InterNations’ Expat Insider, the places where you are most likely to feel the love is Taiwan, followed by Uganda and Costa Rica, Mexico and Colombia. 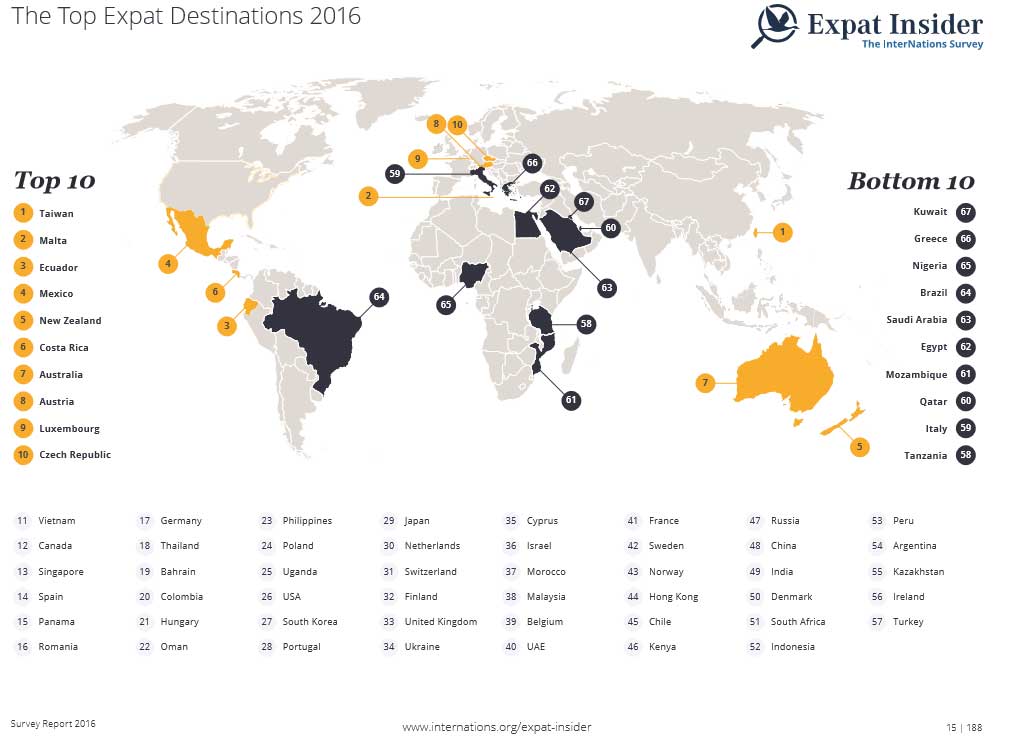 InterNations, which is one of the world’s largest expat network, said that countries in the Southern Hemisphere are generally friendlier than those above the equator. InterNations CEO Malte Zeeck attributes some of that to climate.

“The weather certainly plays a role. [If you’re] living under constant cold and freezing rain, you are probably going to be less outgoing.”

As far as Taiwan taking the crown, it was far and away the winter according to the survey, with 90 percent of expats in Taiwan offering up high marks for hospitality, compared to a combined average surveyed of countries of a mere 65 percent.

According to InterNations the “Biggest Winner”, which indicates the biggest jump year on year, was Vietnam.

Vietnam has made the biggest jump in the 2016 survey, rising up an astounding 24 places to come in 11th out of 67 countries. In 2015, on the other hand, this Asian country only came in 35th place out of 64 countries. It made the biggest gains in the Working Abroad Index (from 36th to 12th place) and the Ease of Settling In Index (35th to 29th place).

Expats in Vietnam are very pleased with the friendly nature of the local residents this year. The percentage of respondents that rate the general friendliness of the population positively has risen by ten percentage points (74% to 84%). In addition, over two in five (41%) regard the friendly attitude towards foreign residents as very good (33% in 2015). It also seems to be easier to make new friends among the local residents this year, with 63% generally agreeing that this is easy to do. In 2015, only 48% were of the same opinion.

“The Vietnamese are kind, caring and very considerate, with a good sense of humour. Life is good here, one of the nicest places I have ever lived.”

Other notable movement amongst Asian nations according to InterNation:

Indonesia is down 20 spots this year, coming in a disappointing 52nd out of 67 countries. In fact, the country has lost ground each year, ranking in the top third at 20th out of 61 countries in 2014 before falling to 32nd place out of 64 countries in the 2015 survey. The country has worsened across the board, with the biggest losses in the Working Abroad Index (37th to 47th place) and the Cost of Living Index (10th to 20th place).

Hong Kong: How the Mighty Have Fallen

Hong Kong is firmly in the bottom half of the ranking, having fallen an additional 18 spots to land at 44th place out of 67 countries. The Personal Finance Index took a major hit, dropping from 24th to 42nd place. The country also lost eleven spots in both the Ease of Settling In (37th to 48th) and the Working Abroad Indices (22nd to 33rd).