Dentsu Jayme Syfu‘s “Dead Whale” campaign for Greenpeace Philippines has received widespread attention by the global media as well as by awards shows including a trio of wins at the 2018 AME Awards.

In an in-depth conversation, Dentsu Jayme Syfu’s Chairmom/Chief Creative Officer Merlee Jayme, and Creative Director Biboy Royong, share the inspiration and the results of this uniquely-creative and impactful campaign that became the global face of the Greenpeace plastics campaign. 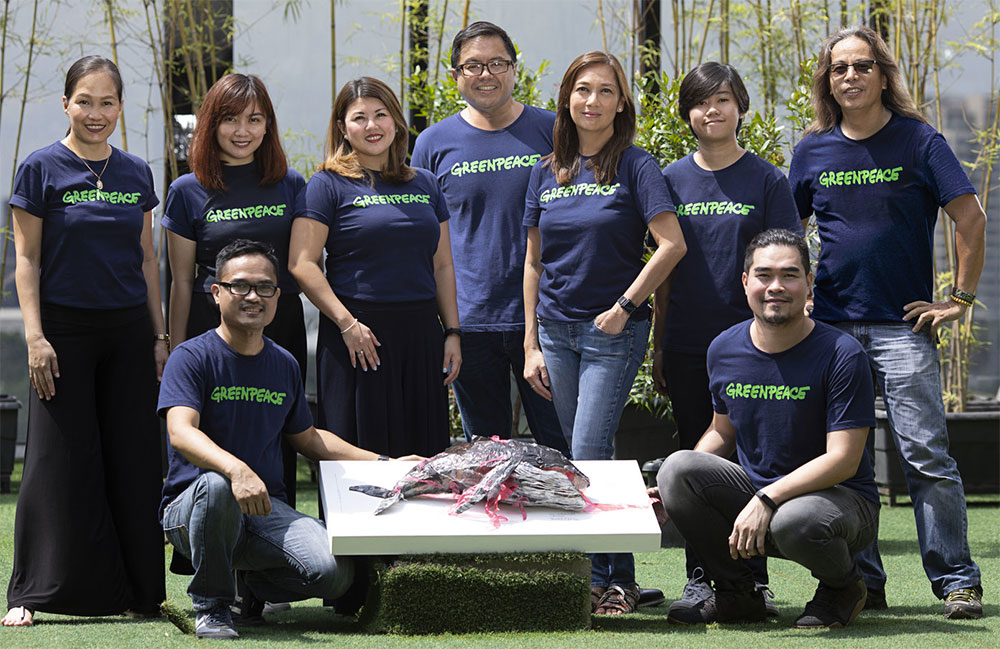 What was the inspiration for “Dead Whale” and what did you hope to accomplish?

The Philippines is the 3rd largest contributor of plastic wastes in our oceans. Sightings of different sea creatures washing ashore in their coastlines are no longer news. The problem simply grew bigger that people no longer bothered to ask why it happened and what they can do to stop it.

The challenge given to us by Greenpeace was to make people see the effects of plastic wastes in our oceans. Greenpeace needed to visualize the worsening case of plastic pollution.

Almost monthly, or even weekly, we are bombarded by news of plastic pollution and how it chokes communities, the planet and its inhabitants, and how it poisons almost all living creatures, including humans.

The bigger challenge was, a lot of environmental groups are already doing campaigns about ocean pollution.

So we were faced with the biggest challenge: to talk to the game changers—the ASEAN leaders—and to the people, to encourage all of them to do something about the problem now that the Philippines, a very small country, ranks number 3 as the world’s biggest contributor of plastic wastes in the ocean.

How did you convince Greenpeace on the idea or were they on board immediately with the concept?

Being a non-profit organization with a limited budget, Greenpeace needed to be bolder in creating urgency for the issue at hand. Instead of targeting the public, Greenpeace wanted to target public officials who can strengthen laws preventing plastic pollution. And just so happens, the 2017 ASEAN summit was held in the Philippines during ocean month (MAY 2017).

Can you share any creative and logistical challenges you faced and how you solved them?

The very first thing in our minds was to make sure the whale is designed as one whole installation, with every bit of plastic securely attached, to make sure no trash will be washed back to the ocean.

We did research on artworks made of plastic materials or plastic wastes and we found a bunch of them. Some artists used available plastic wastes, some went to the hassle of collecting trash from around their area to put together as a sculpture or installation. All the artworks we’ve seen were put in a gallery or in a special location, such as a park, as a display.

Being a non-profit organization with a limited budget, Greenpeace needed to be bolder in creating urgency for the issue at hand. Instead of targeting the public, Greenpeace wanted to target public officials who can strengthen laws preventing plastic pollution.

Our ‘Dead Whale’ was different because we decided to put it on the shore of a beach to make it look like a real beached whale. It was a stunt. Our objective was to surprise people around the area, and at the same time raise awareness on the dangers of throwing plastics into the ocean. The location was a beach in Naic, Cavite. It is part of Manila Bay – considered as one of the most polluted bodies of water in the country.

The ‘whale’ was constructed on-site, around 50 meters away from the actual spot, on a vacant lot that we covered with sacks, so no one would notice it. Before we talked with a production designer, we had already figured out how to do it. We made a miniature whale that we presented to Greenpeace Philippines. It was our guide in deciding the type of plastic materials to use for each part of the whale. 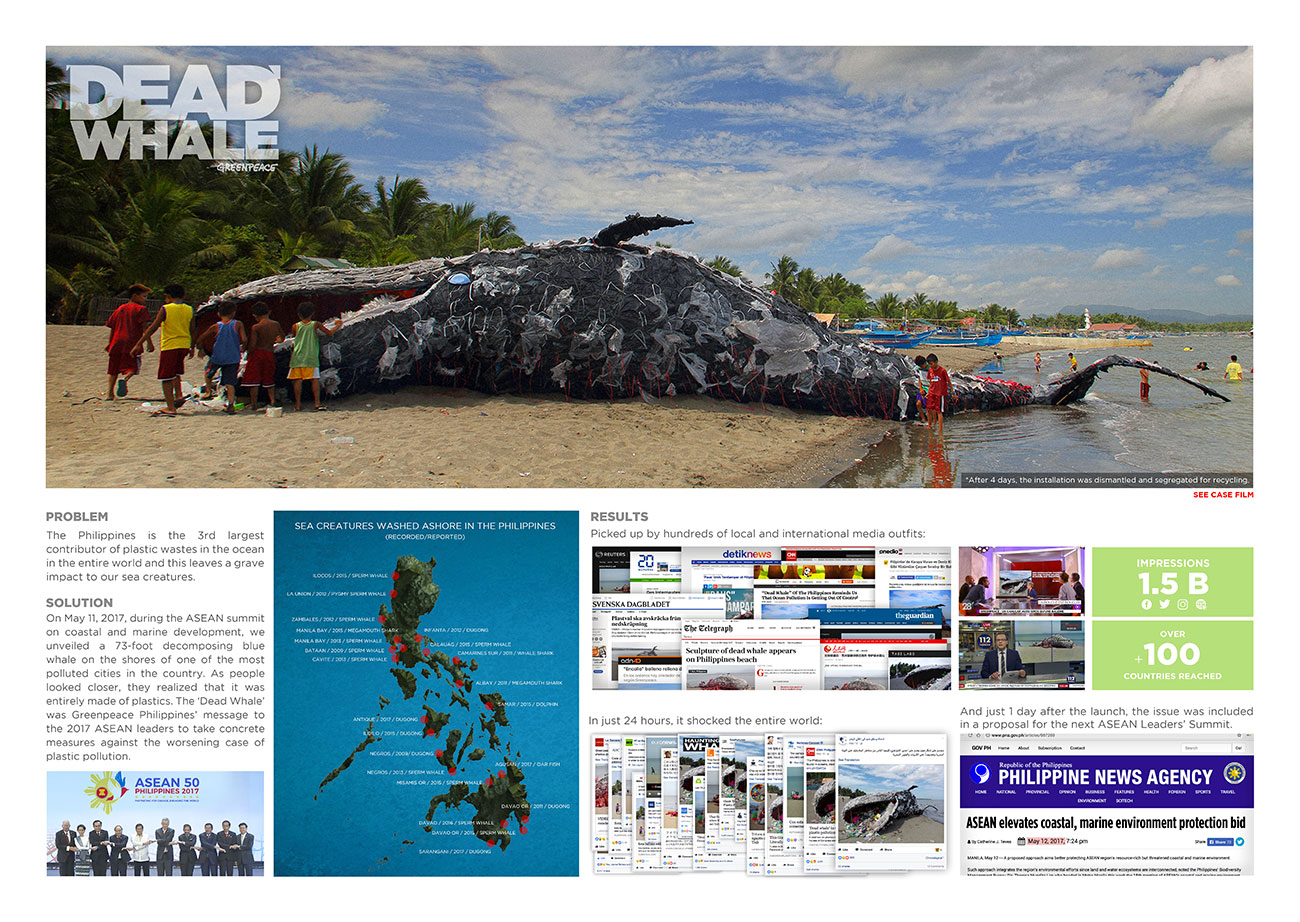 We also agreed on the final position and size of the whale. We agreed on the 50-foot length with a height of 10 feet. But when we realized that we could maximize the vacant lot where we were constructing the whale, we set the final length at 73 feet. We realized that if the whale should appear as if it is starting to decompose, then we can play with the texture – make it look a bit slimy.

For the whale’s colors, we decided to use the actual color of the plastic. We did not use paint. We chose the plastics’ used based on their color. The blue sacks; black, gray, and white trash bags; and black, white, and red strings/straws went to the skin. The twisted white sacks went to the underbelly.

The PET bottles were for the ‘baleen’ teeth. The innards were red net sacks used for packing onions, filled with pet bottles. Basically, all the red plastics were used as the innards. The trash coming from the mouth consisted of assorted plastic wastes. We stuffed the installation with 60 kilos worth of plastic materials. The plastic whale itself is another 100 kilos.

The Dead Whale set a new standard in Greenpeace’s communications work, not only in the Philippines but in many countries where Greenpeace operates.

Beforehand, we designed a 3D model of the whale to decide the final position and placement on the shore. We chose the best spot on the shore and measured the water level, then marked the part where the tail would be submerged in water on a high tide.

We transferred the plastic whale on the actual spot the night before the reveal. It took us three hours to lift and secure it. We had to dig in the sand to make the whale look like a real beached whale. Then to secure it, the lead carpenter placed sand inside the whale to prevent it from being washed back to the water.

How long was the time lapse from inspiration to final execution of the campaign?

We’ve been toying with the idea around 2013. We pitched the idea to Greenpeace in 2017. We had to carefully study how we could effectively make it go viral. Countless plastic installations have been used in the past by different organizations to bring awareness on plastic pollution. However, they were only deemed as public display. The difference with the “Dead Whale” was its realistic appearance using the plastics’ actual color.

After we got the client’s approval, we had two weeks to prepare. We only had five days to actually work on it – from construction to unveiling. We had nine carpenters and craftsmen working on it on shifts. We adjusted some details of the design based on our pace. We sacrificed a bit of the details that would not affect the overall impact. We made sure the plastic whale would convince people that it was a real dead whale — from a distance and lure them to look closer. And we succeeded.

Awareness for “Dead Whale” exploded on social media, to what do you attribute that phenomena?

The simplicity of the idea. We employed a very traditional medium (which is outdoor the sculpture), placed it on the right location and turned it into stunt that people will talk about online.

“We loved the purity of this idea, the effort that’s gone into it, and the fact it achieved so much more than anyone thought it would,” – Toby Talbot, Chief Creative Officer at Saatchi & Saatchi New Zealand

What was the client’s reaction to the results of the campaign?

Astonished. Very happy. They couldn’t believe how big the impact was.

What results were you most proud of?

How fast it spread online. People really talked and debated about it. The most amazing part was when different media sites around the globe picked it up and shared it. The news reached more than 106 countries. At the time, it was picked up by around 1,500 unique sites. Apart from Greenpeace, other environmental groups also shared the campaign. We saw one website in Portuguese shared it via Facebook and had over 1.2 million reach.

The Dead Whale reawakened our audiences and supporters to the evils of ocean plastic pollution. The millions of people the campaign has reached was reminded that if they don’t act now, worse things will come. They realized that plastic pollution is a massive problem that must be solved immediately, and everybody’s help is needed.

Beforehand, we designed a 3D model of the whale to decide the final position and placement on the shore. We chose the best spot on the shore and measured the water level, then marked the part where the tail would be submerged in water on a high tide.

From the 3rd quarter of 2017 until today, people on social media have been lobbying the ban on single-use plastics and promoting other sustainable and plastic-free alternatives.

The success of the “Dead Whale” campaign paved way for other Greenpeace campaigns to get the attention it deserved. As a result of the campaign, large corporations like Nestle and Unilever Philippines finally recognized their devastating role in polluting our ocean waters, and publicly committed to the global ambition of making their packaging 100% reusable and recyclable by 2025.

It proved to be a very popular campaign, and one can see why. Almost monthly, or even weekly, we are bombarded by news of plastic pollution and how it chokes communities, the planet and its inhabitants, and how it poisons almost all living creatures, including humans. The Dead Whale has brought Greenpeace back into the conversation of plastic pollution, as for a while they have been out of this campaign.

It was a good ‘reentry’ campaign for Greenpeace, and it solidified their stature as a global NGO who can bring substantial expertise and resource in the fight against plastic pollution. The Dead Whale set a new standard in Greenpeace’s communications work, not only in the Philippines but in many countries where Greenpeace operates.

Globally, it has been the ‘face’ of Greenpeace plastics campaign. And it reminded Greenpeace how their communications campaign should be– grounded and should be understood and seen by our target audiences.

What did earning the AME Best of Show mean to you, the team, and the client?

Plastic pollution is one of the most obvious problems that we see but most of us don’t even bother to do something about it. The honor is very important to us because the AME proves that the idea has gone beyond what people might say a simple stunt, or just an ambient gimmick. It is a powerful idea that has been executed pure hard work and dedication and launched during a critical timing for the country and therefore, has gathered the most effective and relevant results.

Gayle is the Executive Director/AME Awards at New York Festivals.

Q&A: Merlee Jayme – “My right brain is calling me back”