The three NFTs, which are to be auctioned off with proceeds going to charity, are certainly getting all the attention they surely intended to.

Madonna has entered the NFT market in collaboration with NFT artist Beeple to launch three 3D models of her vagina. That’s not a misprint, you read it right – the controversial singer is going all out in her vaginal display with various things emerging from it, including a giant tree, butterflies, and a robotic centipede.

The three “Mother of Creation” NFTs are available for purchase to the highest bidder from the 63-year-old singer/actress with the proceeds going to charity. You can bid on them here.

According to the official website, “The proceeds from the sale will benefit three nonprofit organizations picked by Madonna and Beeple to further their missions in supporting mothers across the globe.”

“When Mike and I decided to collaborate on this project a year ago, I was excited to have the opportunity to share my vision of the world as a mother and an artist with Mike’s own unique point of view. It’s been an amazing journey building this together from an intellectual idea to an emotional story, giving birth to art.

I wanted to investigate the concept of creation, not only the way a child enters the world through a woman’s vagina, but also the way an artist gives birth to creativity. Most importantly we wanted to use this opportunity to benefit mothers and children who are most in need right now.”

The sale was created with infrastructure support by Moonpay, who will also contribute $100,000 to each charity.

“I say we need a forest with creepy crawly bugs coming out of me,” added Madonna. “Not often does a robot centipede crawl out of my vagina.”

And there are butterflies, too. 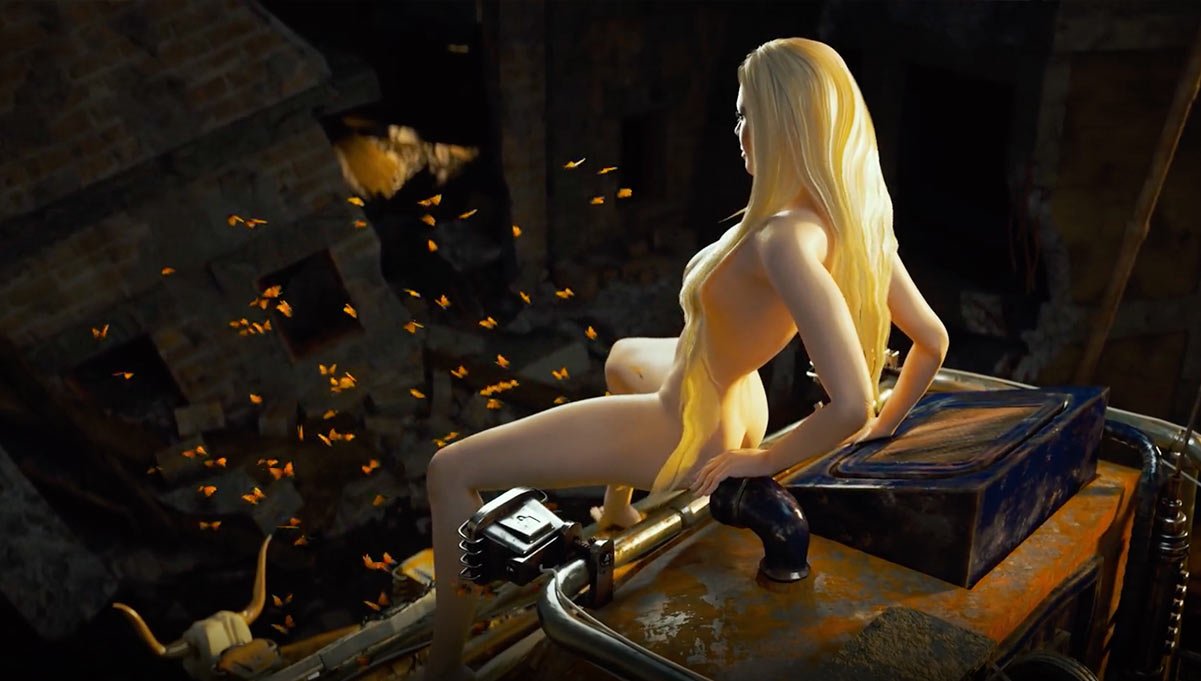 To promote the collection there is a series of films on the official site detailing each of the NFTs. Viewer discretion is advised and each of the films is likely NSFW.

The first of the series is Mother of Nature – Described on the website: “In a cold laboratory setting, with no sign of life, an opening gives way to a branch that transforms into a full vibrant tree. It pushes against gravity and flowers bloom. The tree may bend or even break, but it continues to recreate and flourish.”

This work, says the site, “touches on the metamorphosis journey of butterflies, which are one of the most beautiful creations in nature, and a sign of hope. The butterflies are a metaphor for the paradox that the world is burning down in a post-apocalyptic scene, but there is still evidence of life.

We continue to give birth, no matter what destruction is going on, no matter what oppression we face. It relays the important message that if you are waiting for the world to be perfect or for your life to be perfect to create art, it will never happen. We have to do it, for our own survival in this chaotic, unpredictable world.”

The final work is Mother of Technology, which “takes place in a beautiful forest, depicting the way science can also give birth light into the world, but only if used with the right consciousness. The centipede represents technology – both the life giving-force and the dangers of it, the juxtaposition of dark and light. Technology continues to evolve in the physical, natural and real world; we can do whatever we want, but there are consequences to that. Nature will ultimately win in the end. The work features the poetry of Rumi.”

Reactions were mixed with some loving and some hating it.

The New York Post called it her “latest filthy attention grab,”  with columnist Johnny Oleksinski writing: “This ain’t the sort of nuanced, mysterious, layered artwork that you stare at and try to guess its meaning.”

Madonna tries to explain why she created a NFT collection with robots and bugs and trees and things coming out of her vagina…because Madonna. pic.twitter.com/K5YJ1B152Z

For me 🙋🏻‍♀️always trying to save #nature #savetheplanet this #nftart collab between @beeple and @Madonna is the most inspiring #art so far and my favourite in NFT space 🙏🏼😌 I would gladly buy one without even thinking…if only I had that much eth rn yo!😅

You can learn more about the NFTs and the charities involved here.