While Japan is well-regarded for being home to a culture of extreme politeness run on a complex system of etiquette and strict social mores, the country is still battling deeply embedded nationalist and racist ideology within her population.

A new study conducted by Japan’s Ministry of Justice reveals the depths of the problem, and cause for concern, finding that a sizable number of foreigners living in Japan have faced discrimination “for not being Japanese,” according to the report.

The unprecedented survey of 18,500 expats was conducted last November and December in the form of questionnaires mailed to non-Japanese residents in 37 municipalities. Nationalities included in the survey were Chinese, Koreans, Filipinos, Brazilians, Vietnamese and Americans.

43 percent said they have seen hate speech based on race or nationality on Japanese TV, in newspapers or on the internet.

Perhaps the most troubling finding in the results is that 29.8 percent of those asked said they were subjected to racial slurs –one of the more aggressive manifestations of the deeper social problem.

And the experience was not just a one-off thing: Respondents said they have been confronted with the vile expression either “often” or “sometimes.”

A majority, 54 percent, said the verbal attack was directed at them by complete strangers, while 38 percent said it came from their bosses, co-workers and business partners and 19.3 percent from neighbors.

Among other examples of difficulty, reports the Japan Times, included “getting weird stares from strangers (31.7 percent),” “being harassed because of poor Japanese-language proficiency (25.1 percent)” and “being avoided in public spaces such as buses, trains and shopping malls (14.9 percent).”

The perpetuation of racist attitudes is an additional concern: 43 percent said they have seen hate speech based on race or nationality on Japanese TV, in newspapers or on the internet.

40 percent of those polled also said they found it difficult to rent a house because they were not Japanese — with 27 percent reporting they’d been subject to landlords who put houses up for rent with a stated “no foreigner allowed” policy in place.

Of all surveyed, almost 80 percent of respondents called racism “unpleasant” or “unacceptable.” Not sure where the other 20% stand on it, but I’d imagine it’s not welcome.

Respondents also expressed concern with Japan’s ultra-nationalist campaigns, some of which are well known for cruising the streets of major cities with loudspeakers blaring unrestrained anti-foreigner sentiments.

Government statistics report that 1,150 hate speech rallies were conducted by ultra-nationalists, known as uyoku dantai (右翼団体), between April 2012 and September 2015. Laws to curb hate speech were put in place in June last year, but have been criticized for a lack of strict enforcement. 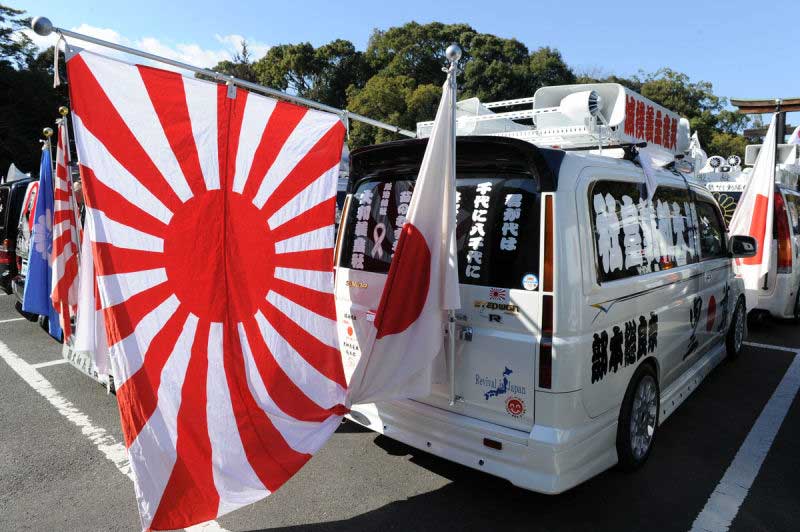 And while the government has yet to take a firm stance in the eyes of observers, it has responded to Friday’s survey results saying it will increase education spending while also making available support services for those who have faced discrimination.

Prime Minister Abe went on record last year saying that Japan’s discrimination dilemma is “extremely regrettable” and that it “affects our country’s and people’s dignity”.

Not to mention the dignity of those subject to it.

In an interview with the Japan Times, Professor Kim Myungsoo, an ethnic Korean resident of Japan and a professor of sociology at Kwansei Gakuin University, hailed the ministry’s survey for highlighting the reality of racism while at the same time discrediting the government’s traditional stance.

“The survey publicly confirmed the reality of victimization caused by racism in Japan, which would prevent the government from sticking to its conventional assertion,” said Kim. “I believe the government is ready to change its position.”