Ever hungry for new ways of entries to their audiences, marketers have not turned a blind eye to TikTok’s massive popularity. Hailed as a favorite among the Gen-Z demographic, TikTok’s success can be attributed to its convenient mobile-native nature, coupled with engaging and digestible bite-sized content that has successfully penetrated global markets and gained international appeal.

What further validates marketer’s attention to TikTok is the duration the app has now been with us. Few platforms actually make it past the two years mark – enough time has now passed for us to see the social proof we need.

To be frank, if you’re still contemplating giving TikTok a real chance, you’re slow to the game. There have already been plenty of early adopters of the platform like Uniqlo in Japan and Zalora Malaysia which are reaping the fruits of their labor.

TikTok Is Currently the Most Downloaded App

Since its launch, the TikTok app’s popularity has been growing at an incredible rate. In October 2018, it was the most-downloaded photo and video app in the Apple store globally. It’s expected TikTok will continue to have a strong presence in 2020 as it has officially emerged as a social media sensation, hitting one billion downloads in 2019.

Last year it ranked as the second-most downloaded app after WhatsApp.

For marketers who are really chasing the right audiences, it’s vital to consider where the app is growing. 44% of the app’s total downloads actually happened in India. If we compare it to the previous year, the TikTok’s overall user base has grown by 6%, according to Sensor Tower.

So Where Does TikTok Really Fall When We Compare It to Other Platforms?

According to the most recent survey from the Pew Research Center done in July, TikTok only captures about 3% of the total social media users above 18 years old, while Snapchat accounts for 23% of the same age demographic. While TikTok is growing fast, there’s still a clear gap that it needs to be closed. 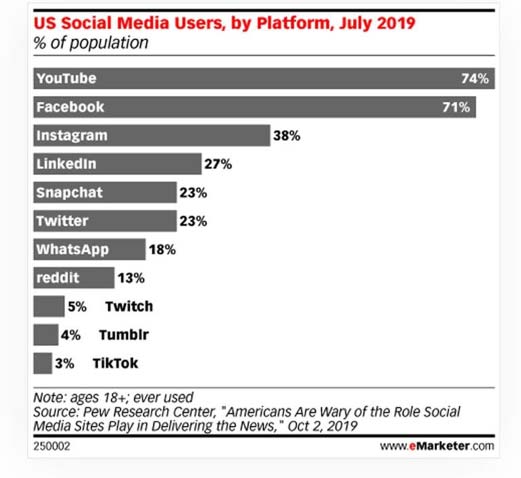 However, the baseline assumption in the media is that both platforms are competing to acquire customers under the age of 18. Accurate and TikTok-verified data on platform demographics isn’t easy to find. Data from App Ape Lab 2018 analysis, a company providing mobile app data and insights, showed that 21.3% of TikTok’s male users are under 20 years of age, and 18.6% of platform’s female users are under 20.

Perhaps the most accurate data we have, so far, about TikTok’s audience demographics actually comes from China, where TikTok (rebranded as Douyin) shared official numbers on their Weibo account. One-third of Douyin users are aged 20 to 24, a quarter are 25 to 29, and 20% are under 20.

So is it still an app for teenagers? Well, from the numbers, we see that’s not exactly the case, which may just be the reason why TikTok is now getting real recognition from marketers.

TikTok Is Still Finding Its Unique Place in the Market

The platform has undergone a series of important updates in the last year. Perhaps the most critical one for marketers is the ability to run ads on the service, opening a set of entirely new opportunities for paid social media.

The app is also set on connecting brands to content creators on TikTok, through its recently launched TikTok Creator Marketplace. This further incentivizes businesses who aren’t always sure what to do with new social media apps to turn to influencers, who’ve already learned the ropes.

It’s been a long time since we’ve witnessed anything as exciting and promising as TikTok’s entry into the market.

The app recently banned all political advertising. In a statement, Blake Chandlee, TikTok’s VP of Global Business Solutions, who actually left Facebook for TikTok, said that the “…nature of paid political ads is not something we believe fits the TikTok platform experience.” This could separate TikTok from other platforms further – a direction that Twitter has now taken too.

TikTok’s mission is to be a “positive, refreshing environment”, its mission statement reads:

“TikTok is the leading destination for short-form mobile video. Our mission is to inspire creativity and bring joy.” But is it different enough from Snap Inc’s mission statement that, if we put aside Snap’s focus on camera technology, has a similar promise?

“Snap Inc. is a camera company. We believe that reinventing the camera represents our greatest opportunity to improve the way people live and communicate. We contribute to human progress by empowering people to express themselves, live in the moment, learn about the world, and have fun together.”

So Are TikTok and Snapchat Simply Too Similar?

Debra Aho Williamson, the principal analyst at eMarketer, shared her view with CNBC, noting that Snapchat should feel increasing competition as both apps compete for user’s time and attention.

She added that “Both apps feature vertical, short, user-generated videos. Although teens use the apps in different ways, the allure of watching and creating TikTok videos is currently very strong in this demographic group.”

Although Snapchat and TikTok may have different features, their user bases are very similar. During Snap’s Q3 earnings call, the platform reported that its users opened the app 30 times a day. While we don’t know how often TikTok users open theirs, Business of Apps reported the app’s Chinese counterpart Douyin users open the app four to five times a day using it for half an hour each time.

Where users decide to spend their time dictates should be where marketers start investing resources in.

It’s been a long time since we’ve witnessed anything as exciting and promising as TikTok’s entry into the market. The two apps that received somewhat comparable hype in the past years were Vero and Ello, both networks that promised an ad-free experience, but didn’t get attention from marketers. TikTok has now passed that crucial wall. It has increased opportunities to monetize the platform, and a growing user base too.

If we look at the numbers, TikTok has a lot of catching up to do, but we also see signals from TikTok users and marketers alike that they’re now ready to pay serious attention to the platform.

Charles is Vice-President JAPAC at Socialbakers