Is Adam Lambert to Sexy for Singapore?

Adam Lambert may have been a hit on American Idol but rival petitions in Singapore have gathered thousands of online votes in a lively debate over whether he is too sexy to be allowed to perform at the city-state’s largest New Year’s eve concert.

The petition against Lambert, addressed to concert organizer Mediacorp and the government, was closed with 20,067 signatures to back its case that a performance by the openly gay singer did not align with Singaporean values.

We urge the organizers of Countdown 2016 to recognize and respect the values of the majority of Singapore that has voiced its desire to preserve our nation’s moral fiber.

However, two rival petitions backing Lambert had gathered more than 11,000 votes by Friday arguing that allowing the performance would show that Singapore shunned discrimination and promoted diversity.

The concert organizer said it was sticking with Lambert, a runner-up on American idol who caused controversy during his 2009 American Music Awards performance when he kissed his male keyboard player and simulated sexual acts with dancers. 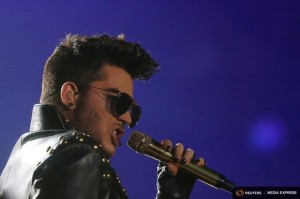 Sex between men is illegal in Singapore.

“We urge the organizers of Countdown 2016 to recognize and respect the values of the majority of Singapore that has voiced its desire to preserve our nation’s moral fiber,” reads the protest petition, which was posted anonymously by a group saying it represented concerned parents.

The petitioners argue that having Lambert at the concert would bring a sour note to the end of the conservative city-state’s 50th birthday celebrations.

State TV company Mediacorp maintained Lambert would perform, and said the televised concert would be suitable for family audiences and conform with broadcast regulations.

Lambert issued a statement on his Facebook page saying:

“I am a uniter, not a divider, and I believe in celebrating the human heart and spirit. I have put together an entirely new show experience for my fans that is kicking off in Singapore.”