Q&A: Steve McGinnes – ‘Surfing the Asian Wave – How to Survive and Thrive in the New Global Reality’

McGinnes talks about his book, areas of convergence and divergence across cultures, how the pandemic is affecting business strategy, and more.

We recently caught up for an interview with Steve McGinnes, author of the book “Surfing the Asian Wave: How to survive and thrive in the new global reality.”

Originally from England, McGinnes spent 15 years living and working across Asia and over the course of his career has worked with global brands including Unilever, Diageo, Danone, Nestle, and Coca Cola.

Along with being an author, McGinnes is a regular guest on BBC World News, where he shares insights on both Asian and global business strategy innovation and branding. All of which he talks about here. Read on.

There has been a steady stream of interest from mid-sized western businesses about quickly entering South East Asia. As the COVID panic and confusion is slowly starting to lift in the West, businesses are realizing that it’s now a different world.

The macro shifts in economic power and global influence that people were expecting to see over the next decade or so are happening before our eyes over a course of weeks.

A lot of Western businesses are understandably spending all their time and effort firefighting in their own back yards. But some have realized that whilst the West is entering a potentially huge economic slowdown, most of Asia is coming through relatively unscathed. And they are starting to look at putting efforts, resources, and investment into entering those markets.

And some of those understand that they can’t do that by simply throwing their current brands and messaging unchanged at new markets.

Those are keeping me busy.

Asia is comprised of roughly 49 different countries. What particular areas does your book focus on and what drew you to those?

Within the 4 billion Asian population, across multiple countries, there are huge amounts of variance and distinction. It’s impossible to speak credibly about ‘the Asian’, or even ‘The Thai’ or ‘The Singaporean’.

So bearing that in mind, there are no specific Asian countries I really focused on, rather I looked at the dominant or demonstrable Asian traits, across countries. The values, vision, the ways of thinking and behaving, that may not apply to everyone, all the time, were certainly applicable to most people, most of the time.

“Some have realized that whilst the West is entering a potentially huge economic slowdown, most of Asia is coming through relatively unscathed. And they are starting to look at putting efforts, resources, and investment into entering those markets.”

So rather than geographic areas, the book focuses on areas of convergence and divergence, which can be seen over and over again, regardless of local borders. From that, we pulled out learnings that are applicable to all the Asian countries.

You mention that the West measures success by quarterly business reports, while Asia measures it by the historical impact. Tell us more about that.

In the west, we are like little kids that haven’t learned much impulse control. We want things now. We want immediate gratification, we value immediate results. Even when we know that we should probably be thinking about the longer term.

Partly I think that is due to how highly we value the impact of individuals and tend to measure the effect of actions. A businesses success is measured quarterly, and the reputation (and reward) of its leaders gauged in accordance with that. We don’t tend to think long term. We think Me, Now.

“New entrants have the advantage of no baggage. They are able to reinvent themselves in these new markets. They can look with fresh eyes at what they offer, and what people want – and adjust accordingly.”

Unfortunately, most problems don’t really have simple, quick solutions. A business’s viability isn’t really based on that month’s earnings. A politician’s success shouldn’t be judged by their level of popularity today.

Asian business leaders talk about their legacy as much as the quarter. The state of the business they will pass on when they step down. There is much more comfort around a bad quarter or even a bad year. It’s a long game. Projects can be started that will not reach fruition until beyond the business life (and actual life) of those that initiate them. And people are not only cool with that, they expect it.

The more we allow ourselves to get pulled into the quartet report merry-go-round and a weekly political popularity contest, the more the West concedes long term strategic advantage to Asia.

Each chapter of your book focuses on an area in which Asia and the West diverge in terms of thinking, tradition, behaviors, and values, and where the biggest and most common mistakes are made. What are some of the biggest?

The biggest and most common mistake made by people working across the West and Asia’s different ways of thinking, values, and vision – is in not realizing that the differences exist. People unthinkingly projecting their priorities, preferences, and values, onto others who do not share them, is the single biggest cause of business (and personal) failures.

All the other common mistakes stem from that.

Becoming competent at engaging with another culture in terms of values, risk, time, power – and the other key areas, can be learned, easily (with the book!). But, it is reliant on first having the objectivity and humility to realize that we in the west, are not the center of the universe. That our ways of seeing things is not the way, it’s just a way.

What are some areas where there is common ground in terms of cultural approaches to business?

Asian and Western businesses share the same fundamental and underlying ambitions. To make money. Minimize risk and uncertainty. To treat their employees well. To try and minimize their damage to the world now and in the future.

But where they differ is in how that is framed, and what they feel is the best way to do it. Making money for instance. Make it when? This month? This year? Over the next 30 years? By risking the business on a single initiative? Or avoiding risk totally? 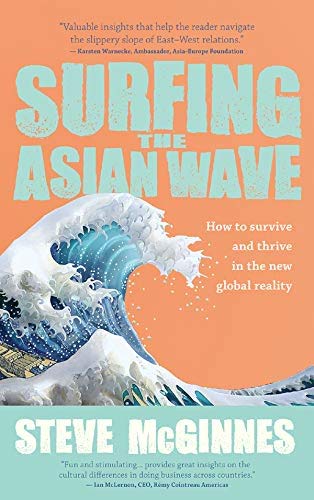 As individuals, we also share a huge amount of commonality underneath the differences. We want to do good work. We want security. We want to be recognized for it and rewarded accordingly. We like to underhand our roles and what is expected from us. We want a degree of autonomy and responsibility.

But again, the difference across cultures is often in how much this varies. How much security we need, or risk we can tolerate. What we feel appropriate reward is. How we feel what is expected should be communicated to us. How much autonomy we want or expect.

We shouldn’t take the common ground totally for granted, but we can usually count on it being there – if we look for it. How that culturally manifests, we should not presume.

Over the course of your career, you’ve worked with several major global brands including Unilever, Diageo, Coca Cola, and others. What can other brands looking to expand in Asia learn from those that came before?

Not much I’m afraid.

When the first global brands launched into Asia it was a different world. Coca Cola, P&G, and others have had a significant presence in Asia for nearly 50years now.

Often they were first entrants into an empty category. Where there was an existing local player, the global brands would usually have a better quality product, or at least a better-looking one in terms of brand, advertising, and pack.

Global brands enjoyed a huge advantage from a premium quality halo, simply because they were foreign. Rightly or wrongly foreign brands were perceived as being better than the local ones. It simply wasn’t a fair game. The local brands were fighting with one hand tied behind their back, in a battle they didn’t know the rules for.

Now things are different. Local brands and marketeers are as good as (or better) than many global players. They foeti have greater local insight. As economies improve people feel greater local pride and resonance with authentic local brands and products. As the Western economies slow – and western leaders fail to be seen as leading, the global brand shine can start to tarnish.

If the global brands tried to enter Asia now, with the same tactics they used previously, they would fail.

“In the west, we are like little kids that haven’t learned much impulse control. We want things now. We want immediate gratification, we value immediate results.”

Where we can learn is in how some of them have grown – or died. The brands that increased their understanding of the local markets, who ensured their messaging was relevant to regional and local consumers, who developed locally-focused NPD – simply those who realized they couldn’t keep pushing Western-centric brands and approaches, have grown.

Those that kept the same approach they launched with – have not.

New entrants have the advantage of no baggage. They are able to reinvent themselves in these new markets. They can look with fresh eyes at what they offer, and what people want – and adjust accordingly.

There are huge successes to be had in Asia, but not by trying to be Coca Cola circa 1979.

In an interview last year regarding the NBA’s troubles with China, you talked about the difficulty navigating sentiment at home in Western markets with China’s way of doing things. How do you think brands are doing on that front? And how can they do better?

I don’t think any progress has been made in that area. But the response to the mistakes brands make with China (and Asia) has been temporarily drowned out by the roar of disapproval from brands missteps around race and gender at home. Should brands with that have grown in the West, and a core customer base still there, adhere to the values of their home markets and customers, or should they adapt to the requirements and expectations of new marliest they want to enter.

“The biggest and most common mistake made by people working across the West and Asia’s different ways of thinking, values, and vision – is in not realizing that the differences exist.”

Usually, the answer should be to do both. Adjust your position and messaging, to match needs, whilst staying true to your fundamentals. But on this subject that’s not possible – because A – freedom of speech, is, to say the least, rather fundamental, and B, China isn’t just reacting to what brands say within in their sphere of direct influence (Asia), but also what the brands (and their employees/partners etc) are saying at home. So it can’t be avoided.

Right now it’s just gone waited, but it will blow up again soon.

What’s next for you?

Surfing the Asian Wave looked at the world almost like a Ven diagram, with Asia and the West as the two large circles of influence, with an overlap area of convergence. That overlap area is where I think the opportunities are.

Next, I’d like to add another circle to the diagram and look at another level of convergence and opportunities. Maybe that circle will be the Islamic world, or maybe Africa?