First launched in 1974, the popular dairy/ice cream brand Binggrae’s Banana Flavored Milk is one of South Korea’s most iconic beverages and has long been loved by consumers, regardless of age, for its deliciously refreshing flavor.

As a ubiquitous brand with a long history, one contemporary concern for its makers is that it might come across to a younger generation as an everyday, run-of-the-mill drink.

To address this insight, Seoul-based Innored created the ‘MyStraw’ campaign, an innovative and fresh new approach to engage millennials as the new generation of Banana Flavored Milk consumers.

One of the first things that pops into the mind of Korean youth when hearing “Banana Flavored Milk” is the Korean traditional earthenware ‘crock pot’ shaped food container, an easily recognizable likeness that has remained unchanged for more than 40 years. 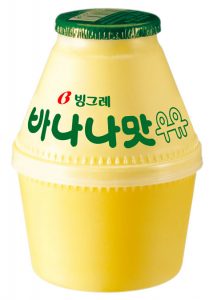 With this in mind, Innored accepted the challenge to expand on Banana Flavored Milk’s unique charm with a campaign focusing on the straw. By looking beyond its functional role as a drinking device, Innored sought to position it as a ‘partner accessory’ —offering a unique, fresh look that complements the characteristically shaped container, while tailoring the campaign to engage millennials in an innovative new way.

While the function is still that of a straw used to drink Banana Flavored Milk, Innored sought to create a novel experience when enjoying the beverage with a line of cleverly-designed, out of the ordinary straws in tune with a youthful lifestyle.

To achieve the goal of producing something completely new and innovative, the team focused on two primary principles for the development of MyStraw:

The Five Types of MyStraw

All of the MyStraw’s created by Innored were done so with a practical use in mind, not simply for aesthetically pleasing props in a commercial shoot. Therefore, each of the MyStraw designs were constructed with high quality food-grade materials.

A straw for consumers who find the traditional thin straw good for a casual session of drinking, but too thin to enjoy a sufficient mouthful during Korea’s sweltering hot summers or after an intense round of exercise.

Four times larger in diameter than its thin cousin, The Giant Straw allows Banana Flavored Milk lovers to enjoy more than a mouthful. And, unlike its thin, plastic counterpart, The Giant Straw was made with stainless steel, which can easily be stored inside the fridge for the ultimate, cold banana milk experience anytime.

As an accompanying accessory, Innored additionally developed a specially designed brush to clean the The Giant Straw for reuse.

Over the years, Koreans have often turned to Banana Flavored Milk as a refreshing way to nurse a hangover. With this insight, the Ringer’s Straw is aimed at Korean Millennials who engage in a busy lifestyle of meeting friends, participating in clubs or joining in company events —all of which sometimes involve tossing back a few drinks.

The Ringer’s Straw is a 1.7 meter long tube that looks just like a hospital IV, giving the impression that one is being cured of their hangover as they lay down and enjoy the soothing taste of Banana Flavored Milk.

Like most of their compatriots, Korean millennials love spicy food. However, for even the most hardened hot food lovers, the spiciness often found in Korean cuisine can sometimes be too much to take.

Utilizing this insight, INNORED created the SOS Straw, a fire extinguisher-shaped device that allows users to spray Banana Flavored Milk directly into their mouth to put the fire out after a mouthful of spicy food.

A DAY, A SHOT, A HASHTAG: Rarely a day passes by when Korean Millennials don’t upload a moment of their life to Instagram. And they often do so with the hashtag #Lovestagram, which is one of the popularly used declarations of love and affection by Korean couples.

The Love Straw is a heart-shaped straw, designed for couples to take photogenic selfies, enjoying Banana Flavored Milk together. With a narrow 9cm distance between the two straws, the pair can’t drink without touching cheek-to-cheek for that perfect capture of a romantic moment together.

Some people simply can’t get enough of Banana Flavored Milk. So, why not drink several bottles at once? This straw was developed for those millennials who long for more than just one bottle of banana milk to satisfy their thirst, allowing them to drink multiple bottles simultaneously.

Just in case they don’t want too much of a good thing, the One Shot Straw was thoughtfully designed with an emergency stopper that allows the person to regulate the flow.

Considering the popularity of “Mukbang”, which is an audiovisual broadcast in which a host eats large quantities of food while interacting with the viewers, it will come as no surprise when consumers voluntarily start the challenge to see how many bottles they can drink at one time.

Within 12 days of the online release of five campaign videos introducing the five types of MyStraw’s online, they collectively garnered over 10 million views. By the 3rd week that number reached an impressive 20 million views.

With over 11,300 shares of the videos across social media, it was immediately clear that the goal of establishing a fresh, new and innovative brand positioning of Banana Flavored Milk was a success with the millennial target demographic.

One week into the campaign release, three of the five MyStraw types were manufactured as products available on the popular Korean ecommerce platform, Gmarket. On the first day of the online sales, 3,000 sets were purchased and, within a week, all of the MyStraw products were completely sold out.

Moving forward, the marketing strategy is to ride the wave of popularity by making the straws available at two brick-and-mortar brand shops known as ‘Yellow Cafe’ in mid-August this year.

Particularly pleasing to the makers of Banana Flavored Milk was the reaction of YouTube influencers, as well as other ordinary consumers, who voluntarily uploaded MyStraw product reviews, garnering more than 1.4 million views —amounting to over 80 million KRW ($72,000USD) worth of organic media exposure.

The positive response from the target consumers themselves was particularly well noted by ad industry experts.

“Currently, MyStraw products are actually manufactured as products on Gmarket, marking a shift from a time when advertisements solely sought to carve out a catchy frame, poster, or a CC, to where it’s about brand content and further designing, and providing, a brand experience,” said Google Korea Senior Manager, Cheon-seok Kim.

“Companies and brands who are still promoting themselves saying, ‘We are digital’ or ‘We are a mobile company” on TV, should give serious thought to what is truly important, as was displayed by the ‘MyStraw’ campaign,” Kim added.

Consumers who watch the videos and then try the products for themselves, are uploading their experience using the hashtags #MyStraw and #BananaFlavoredMilk.

The versatility of the current campaign and its successful organic growth and resonance with the ever-evolving millennial mindset, is the ideal result, illustrating that Innored accomplished its goal of taking a traditionally popular brand and giving it a fresh new, innovative spin that appeals to a new generation of consumers.

Innored looks forward to more millennials enjoying Banana Flavored Milk in their own unique way, and a future where the product continues to evolve in its appeal to their tastes as consumers.