With a global average of 46% relying on social media as a new source, Indonesia and Vietnam were tied for the top, followed by South Africa, the Philippines, and Thailand. Germany and France were least likely at 18% and 24%.

New research from YouGov Global Profiles tackles the question of to what extent do people around the world turn to social media as a source for keeping up with the news.

The answer to that depends on what country you’re living in according to YouGov’s data which found that Indonesia and Vietnam rank highest in a survey of 28 global markets that found more than two in three Indonesian and Vietnamese consumers use social media as a source of news.

Consumers in the Philippines (63%) are the next most likely in APAC to catch up on news through their social media feeds, followed by those in Malaysia (56%), Taiwan (56%) and Singapore (55%).

In contrast, consumers in Australia are the least likely in the region to use social media as a source of news at 33%. 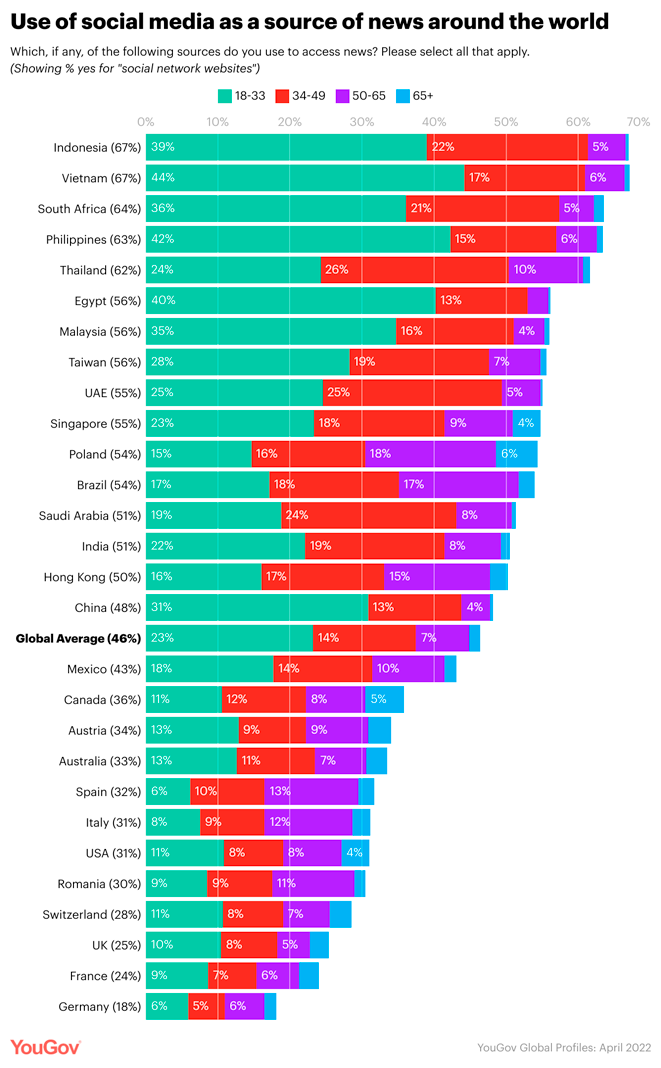 When analyzed by age, consumers aged 18-33 years made up the majority of those who use social media as a source of news in Vietnam, Philippines, Egypt, Indonesia, South Africa, Malaysia, and China and half of those in Taiwan.

In most other markets, consumers aged 18-33 years are still the age group that makes up the largest proportion of those who use social media as a source of news – except in Thailand, Saudi Arabia and Spain – where consumers aged 34-49 years are the relatively largest group.