The advertising market is losing steam following highs in 2021.

As we hit the midpoint of 2022, GroupM says it expects advertising to grow by 8.4%, which is slightly lower than the 9.7% forecast issued in December 2021. The latest numbers exclude the impact of U.S. political advertising, which is expected to hit $13 billion this year — up from $12 billion back in 2020.

GroupM’s revised outlook comes from what it describes as “numerous problems at the forefront of daily life in many of the world’s largest advertising markets,” including the war in Ukraine, global supply chain disruptions associated with pandemic-driven lockdowns in China, ongoing input cost inflation, and higher prices for consumers. Prices for food and other goods have been consistently rising at unusually elevated levels for the better part of the past year in many places leading to headlines of inflation and the potential risk of recession.

The effects from China, where advertising accounts for 20% of the global ad market, are driven by a slow down to expected growth of 3.3% this year – down from 10.2% which was originally forecast for the country which has been hit by the impact of the government’s strict COVID-19 lockdowns during the first half of the year.

“Although the overall economy and environment is more negative now than it was in December, broadly speaking, people in our industry and I think many pundits are overly negative relative to the reality of how the overall economy is faring,” said Brian Wieser, the president of business intelligence at GroupM, during a call with journalists.

Digital continues to grab more ad spend share, with the forecast predicting digital advertising platforms should grow by 11.5% on an underlying basis during 2022 versus a previous 13.5% forecast.  It currently represents 67% of the industry’s total this year and should reach 73% in 2027, said GroupM

However, in other markets it is less severe: In China inflation most recently ran at 2.1% while in Japan the figure was 2.5%, and in Australia, it’s 3.7%.

The report added: “In two other large markets, Brazil and India, inflation was high to be sure — up 12.1% and 7.8%, respectively — although in those countries relatively higher levels of inflation have been much more common in the past, so consumers and businesses are somewhat more experienced at managing it.” 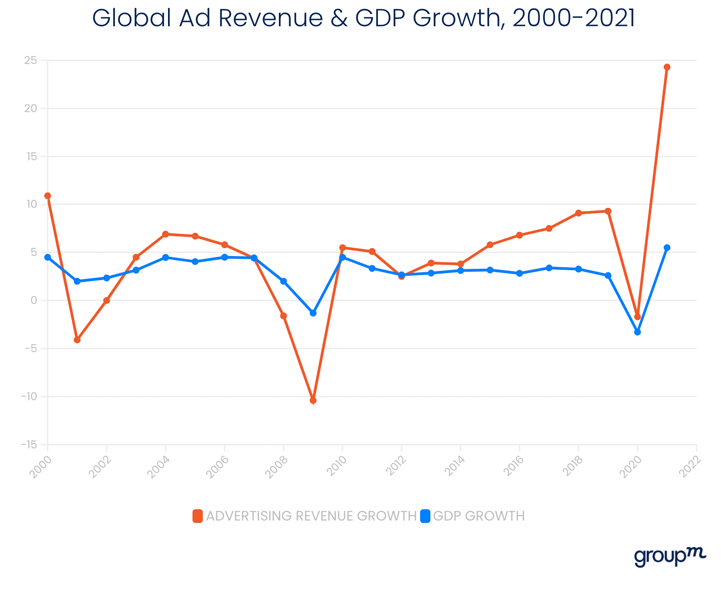