Traditional media, combined, is expected to record 1.5% growth to $324.2bn, but internet investment far surpasses that, growing almost nine times faster, at 13.2%. Together, Facebook and Alphabet will be taking in 35 cents of every advertising dollar on the year, said Warc.

While TV ad spend is set to rise by 2.5 percent this year to reach 29.2 percent of all global advertising, the rise in spending is largely attributed to the 2020 US election which will see over $4bn spent on promoting presidential campaigns.

While advertising on Facebook and Google tilts the scale of ad spend globally, traditional media is expected to reach record growth of 1.5 percent this year reaching $324.2bn – which marks the first rise since 2011. This growth is boosted by both the US presidential election campaigns and the Tokyo Olympics.

Overall, global advertising spend is projected to rise 7.1 percent to $600bn, thanks to 13.2 percent growth in online campaigns.

“Internet ad growth has been far stronger than the state of the global economy would suggest, rising seven times faster on average since 2015,” said James McDonald, managing editor at Warc.

“But, regulation aside, online platforms are bound by the law of large numbers, and revenue growth is easing for key players like Alphabet and Facebook.” 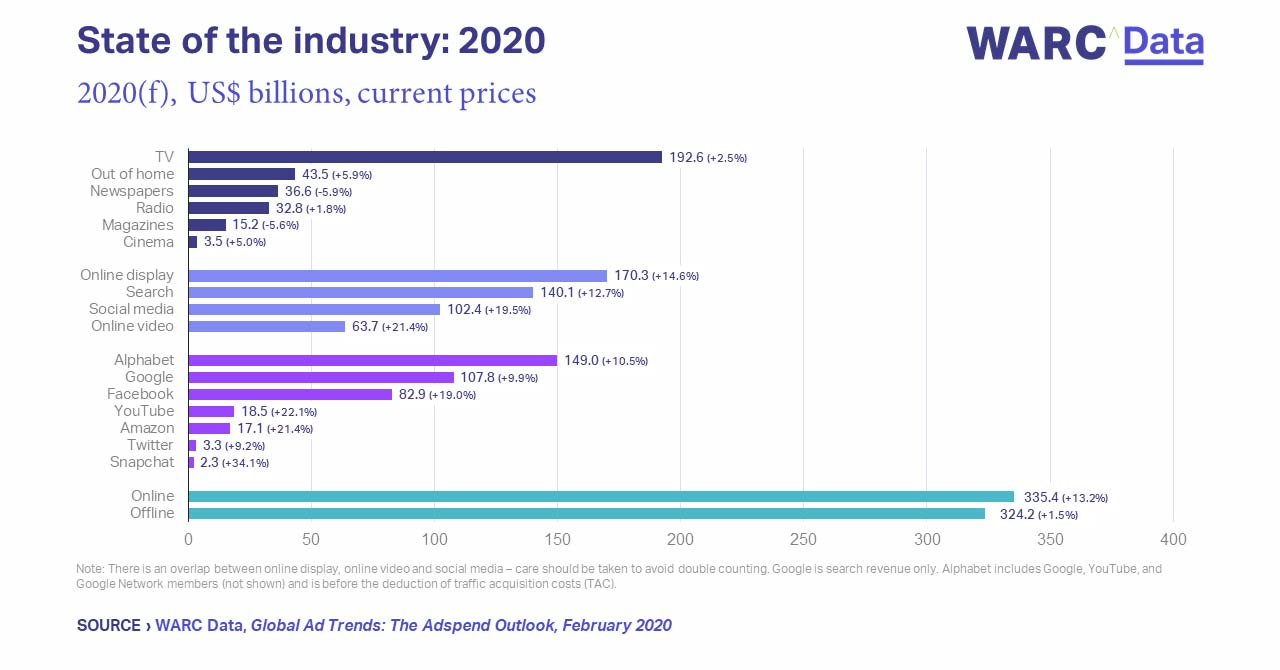 Warc’s figures do not include the coronavirus outbreak and its potentially “notable impact” if mega-events such as Olympics or the Euro 2020 tournament are canceled or postponed to a later date.

“We are yet to amend our forecasts in light of the COVID-19 situation, as we would expect – if the crisis is contained – displaced spend to be reallocated later in the year,” said McDonald.