According to the Q1 2019 Digital Marketing Report from Merkle, DuckDuckGo organic search visit grew at 54% overall and 78% on mobile devices, outpacing other search engines. It accounted for 0.5% of organic search visits in Q1 2019, up from 0.3% last year.

“As recently as Q4 2017, mobile devices generated just 46% of DuckDuckGo organic search traffic, compared to 56% for Google,” said Andy Taylor, Director of Research at Merkle. “Over the past year, though, mobile share of both engines has trended remarkably close. In Q1 2019, both saw mobile account for 62% of organic search visits.”

He added that the growth is impressive primarily because, unlike Google, DuckDuckGo does not have default search engine status on iOS and Android devices.

According to Gabriel Weinberg, CEO & Founder at DuckDuckGo.com, the growth can be attributed towards a growing awareness of issues surrounding online privacy, with internet users actively looking for ways to easily reduce their digital footprint.

“DuckDuckGo is trying to set a new standard of trust online,” said Weinberg during an episode of Quora Sessions on DuckDuckGo. “We believe the Internet shouldn’t feel so creepy, and getting the privacy you want online should be as simple as closing the blinds.” 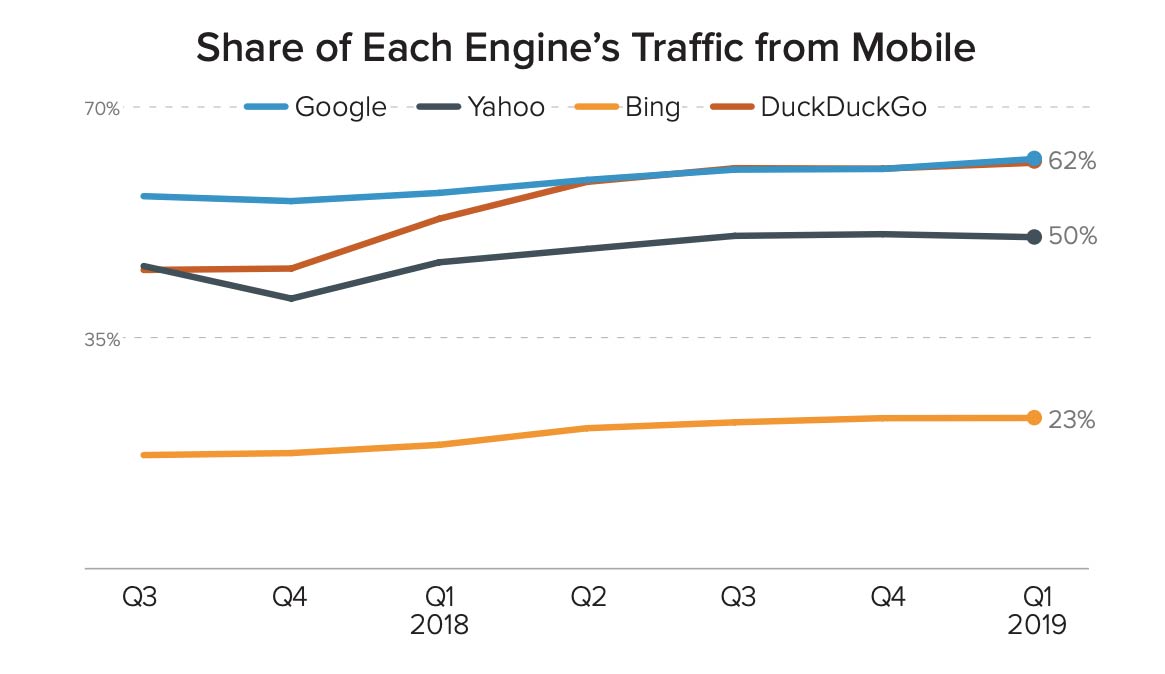 With over 29 billion direct searches on DuckDuckGo to date, the engine stands out among Bing, Google, and Yahoo as one that doesn’t track its users, going so far as to using a guess based model to compute how users it has based on market standards between searches and users.

“DuckDuckGo promises that using the search engine means taking back your privacy,” said Adam Dorfman, Director of Product Management at Reputation in a post. “For instance, DuckDuckGo does not store users’ personal information, follow them around with ads, or track them.”

Syndicated through Yahoo, the revenue model of DuckDuckGo relies on advertising and affiliate links that appear above search results. The search engine also collaborates with Amazon and eBay for affiliate programs. Mark Ballard, VP of Research at Merkle, told Branding In Asia that the positioning of DuckDuckGo as a privacy-focused competitor in the search market has likely fed into its recent strength.

“DuckDuckGo sees a relatively high share of searches take place on mobile devices, which is impressive because Google is the default search provider on the two major mobile platforms in Android and iOS,” said Ballard. “This suggests the DuckDuckGo user base is likely younger, more tech-savvy, and ultimately, more concerned about privacy than the average searcher.”