Confronting Problems With Sexism in the East Asian Airline Industry

Japanese-born Mariko* is a veteran in the airline industry. After a decade-long career of flying with European airlines, she is now fluent in several of the continent’s languages. She also has a reputation on board for her professionalism and polite yet distinctive sense of humor; a hit with passengers and fellow crew members alike.

Her performance was commended several times in the company where where she worked, and Mariko went on to become head flight attendant for one of the continent’s leading airlines – tasked with leading the crews on some of its most lucrative international routes.

But a sudden illness in the family forced her to return to Japan. As she set up life back home to be closer to her ageing parents, Mariko made plans to continue her career using the skills and experiences she developed in Europe.

In Japan, ‘nomikai’, compulsory after-work drinking parties with coworkers, is characterized by young female employees pouring drinks and entertaining the conversations of their male superiors.

Both Japanese and Asian airlines – she assumed – could use her skills to lead younger crews as they sought to expand their international routes.

Months of unsuccessful interviews with various Japanese and Asian airlines proved otherwise. Demoralized by constant rejections, Mariko has begun to accept that she may not return to the skies as long as she remains in Japan. “Here I am old, and flight attending is not a career anyway” she says.

Mariko’s story is part of a wider issue in East Asia: sexism in the airline industry.

VietJet, Vietnam’s most successful low-cost carrier, saw its market value rise on the back of an advertising campaign objectifying its young female flight attendants as they posed in bikinis. 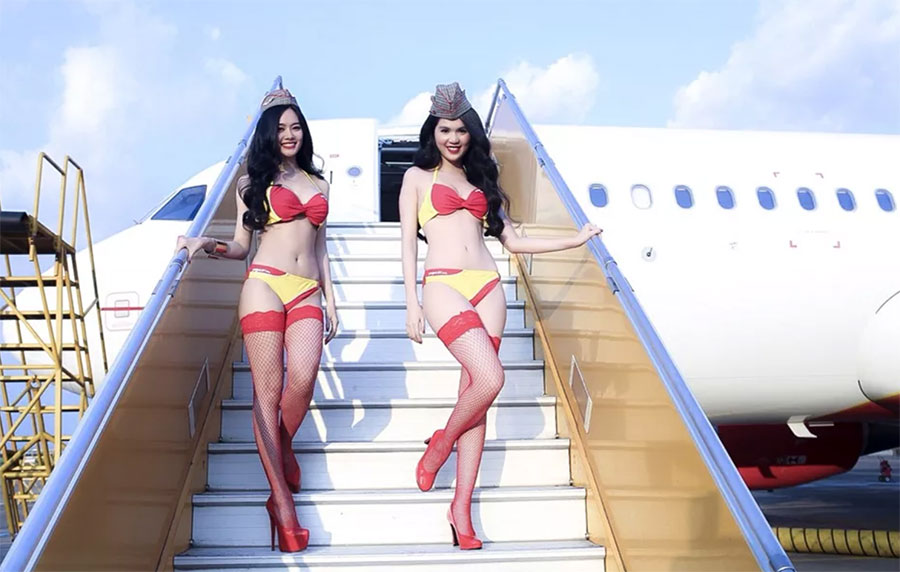 Other Asian airlines have also used this tactic as a market differentiation factor and major selling point to get one up on competitors. China’s Hainan Airlines listed a model-esque physique as a requirement for their female flight attendants.

The blatant use of women to sell plane tickets gives some insight into how women are put into stereotypical gender roles in the East Asian region. Young, physically attractive women tend to play the role of voluntary “service” staff providing companionship and entertainment for older males.

In Japan, there is a widespread industry of hostess clubs; establishments where men pay to drink while chatting with beautiful young women. The companionship of young attractive females is commodified as a profitable product.

Given the entrenched perception of women as “servants”, it makes business sense for Asian airlines to essentially sell young female flight attendants as such.

Within the corporate environment, nomikai, or often compulsory after-work drinking parties with coworkers, is characterized by young female employees pouring drinks and entertaining the conversations of their male superiors. While varying in magnitude across different countries, local equivalents of hostess clubs and nomikai exist throughout much of the region – influenced by East Asian corporate culture.

Behind the acceptability of young females being treated as “servants” is an entrenched social norm of seeing females, especially those who are perceived as young and inexperienced, as objects of pleasure.

Even in countries where reported rape statistics are low, women face sexual harassment in the workplace. In Japan, a survey conducted in 2016 by the Ministry of Health, Labor, and Welfare reported that some forty percent of women between the ages of 25 and 44 were touched inappropriately at work, with seventeen percent pressed into sexual relationships by their male coworkers or bosses.

If free-spending male customers demand young women serving them, it is profitable to meet that demand.

Similar studies in China and South Korea showed even more severe results: in Korea eighty percent of people questioned for a government survey reported sexual harassment in the workplace, with less than one percent of cases resulting in official action within a company.

Beyond the workplace, the BBC reports that in Japan, two-thirds of women in another survey reported to being groped on trains, and more than six thousand people were arrested in 2008 for this kind of harassment.

MORE: Two Ads I Like and One I Don’t – Ibraheem Youssef, Regional Creative Director, Phibious

In neighboring South Korea, the Ministry of Gender Equality and Family noted that more than 22,000 cases of rape were reported in 2011. But this figure only represents ten percent of estimated total cases for that year.

Similar figures are found for other East Asian countries. Social norms which degrade women – and create an environment where they feel unable to speak out – make it difficult to reverse institutional sexism in Asia.

Considering the scale of sex tourism to Asia, this is sadly unsurprising.

A 2016 UN Study found that some 250,000 men travel every year to Asia for sex with underage or adolescent women. 63.8% of the offenders are Westerners, with the remaining mostly coming from a variety of Asian countries. The report addresses the limitation of the study, arguing that for every case of such sexual exploitation reported, many others remain unknown.

The result is that older females who no longer fit that servant image usually have no choice but to look elsewhere for jobs – as Mariko’s case shows.

It is against this background of male demand for sexualized young women that Asian airlines set their strategies for attracting customers. This will only continue in the absence of legal, cultural, or social pressures for change. If free-spending male customers demand young women serving them, it is profitable to meet that demand.

The result is that older females who no longer fit that servant image usually have no choice but to look elsewhere for jobs – as Mariko’s case shows. Instead of strictly focusing on flight attendant openings, she has gradually shifted her aspirations towards flight attendant training and administrative ground staff positions. But she continues to blame herself for her lack of success she has had back in Asia: “perhaps it is just because I am not good enough for them”, she says.

The plight of older female flight attendants in Asia is just one example of how sexist stereotyping in the region is continuing to entrench the business and cultural practices of female objectification. And until stronger government regulations on sexist advertising and hiring procedures are put in place, there sadly remains little incentive for companies to stop these practices – particularly considering how well they are received by Western male clientele.

*All names used in this article have been changed to protect the privacy of those involved.

This was originally posted in The Raddington Report

The opinions of the writer are his own and do not necessarily reflect those of the publisher.

Xiaochen Su is a PhD candidate at the University of Tokyo specializing in Asian immigration issues. He previously worked in Taiwan, South Korea, and Southeast Asia in both academic and online retail industries.