China’s capital is stepping up a campaign against foreign espionage from, offering rewards ranging from $1,500 to $72,000 to citizens who blow the whistle on suspected spies, state media said.

Since taking office in 2013, President Xi Jinping has overseen a raft of laws and campaigns to secure China’s national security against both domestic and foreign threats.

The “pressing” need for new measures to guard against foreign spies is an unfortunate side-effect of China’s reform and opening up to the world, the official Beijing Daily newspaper said.

“Foreign intelligence organs and other hostile forces have also seized the opportunity to sabotage our country through political infiltration, division and subversion, stealing secrets and collusion,” it added.

The Beijing City National Security Bureau is encouraging citizens to join counterintelligence efforts, by offering rewards of 10,000 to 500,000 yuan ($1,500 to $73,000) for information on spies, it said.

The government has acquired new powers to safeguard China with a national security law passed in 2014, followed by measures on counter-terrorism, the management of foreign non-government bodies and cyber security.

Western governments have spoken out against the new measures that they say define China’s national interests too broadly, flagging the risk that they could be used to intensify a crackdown on dissent.

China says the laws are fitting, given the reality of its national security concerns.

In April last year, China launched a series of warnings against espionage, publicizing rare details of spy cases in state media, and highlighting how romantic relationships may be used to uncover sensitive information.

Rewards to encourage security vigilance are a common government tactic used, for instance, to draw out information on “terrorism” in far western Xinjiang.

Working with employees of state organizations to harm China’s national interests, encouraging defection and buying state secrets are potential spy behaviors that could be reported, the paper said.

Discovering espionage equipment, such as recording and monitoring devices, could bring extra rewards.

For example, fishermen in coastal Jiangsu province received rewards in January for the discovery of a suspicious device that proved to be collecting data for foreign countries.

People exploiting the new measures to frame rivals will be held accountable, the paper warned, but good faith errors will attract no reprisals.

This follows last year’s release of cartoon posters in Beijing public offices warning women against falling for the romantic trickery of foreign men with undercover motives. 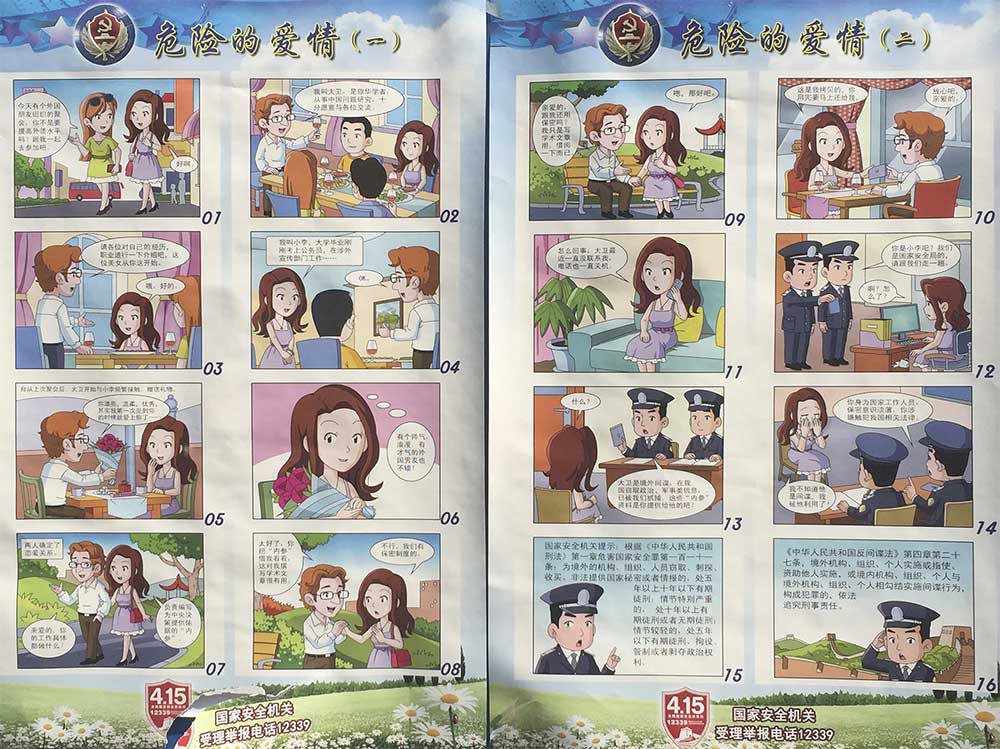