The Report says media agencies continue to experiment with a wide range of game advertising formats for brand building and storytelling, and now see game advertising as a key opportunity to reach a diverse audience.

According to the 2022 IAB Australia Game Advertising State of the Nation report, brands and agencies view game advertising as an opportunity to reach more diverse audience groups as the gaming landscape evolves. This reflects a shift from the medium having previously been used to engage niche, harder-to-reach audiences.

The report was conducted in June 2022 by the IAB Game Advertising Working Group amongst 80 advertising decision-makers working at agencies and brands.

“There has been a pronounced shift in thinking in relation to game audiences over the last year with more agencies realizing that Australia’s games landscape reaches a diverse, mainstream and inclusive audience of all ages, genders and backgrounds,” said Gai Le Roy, CEO of IAB Australia.

“This has shifted strategic thinking and planning away from traditional gaming stereotypes which skewed young, single males into the mainstream to help build brand, reach a diverse audience, and drive incremental reach.”

The report additionally noted an increase in the number of agencies considering different forms of game advertising regularly when creating media plans – up from 20% in 2021 to 25% in 2022. However, a third of agencies still have gaming in their experimentation bucket (32%). Nearly 4 in 10 (38%) have no experience with this form of advertising, though the majority of these are looking to in the future. 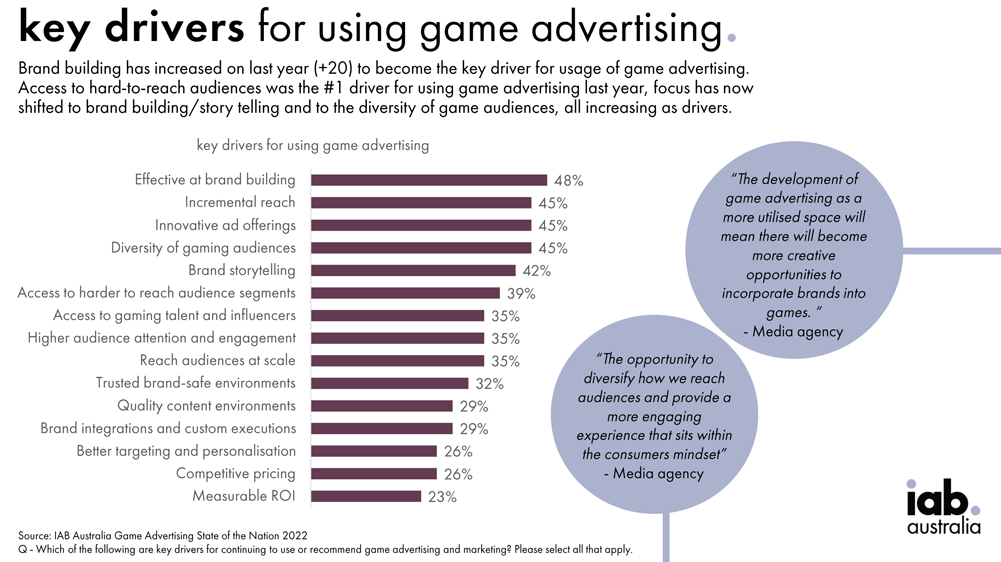 According to the report:

“Advertisers are experimenting with a wide range of game advertising formats, including the most popular streaming adjacent display/video, mobile game ads and live streaming formats, as well as some experimentation with emerging formats such as shoppable ads, direct product placement and metaverse activations. There is future appetite to use these popular formats again and these emerging formats for the first time.”

While it is a broad landscape with myriad formats, game advertising has been around for a while and includes streaming ads adjacent to display and video, mobile game ads and live streaming video. However, brands and agencies are looking to find new formats including what possibilities  metaverse activations can offer.

While only 8 percent of respondents had experience with metaverse activations or planning, 6 in 10 (59 percent) are hoping to experiment over the next year.

IAB also noted the lack of creative done specifically for the media environment, with only 17 percent tailoring the creative for gaming environments and 39 percent rarely or never doing so.

Image: Sean Do, via Unsplash