The Boston Consulting Group’s (BCG) 15th annual global wealth report, which measures private wealth across households, says the new crop of millionaires in China and India has put the combined fortunes of Asia ahead of its European peers as the balance of global affluence continues to tilt eastward.

[quote_box_left]The creation of new “millionaire households” happened more quickly in the Asia-Pacific than anywhere else and by 2019, BCG predicts that Asia will be home to more than a third of the $222 trillion global total.[/quote_box_left]

The study also predicts that the region will surpass North America in combined affluence within the next 12 months.

Moving into the number two spot with $47tn in private wealth, Asia is up 29% from 2013. North American private wealth totals are currently at $50.8tn, keeping it the wealthiest region, but that won’t last for long as BCG projects that by next year the wealth of Asia Pacific’s so-called “high net worths” will soar to $57tn.

BCG sites the booming equity market as a factor as well as the massive fortunes created by entrepreneurs such as Chinese billionaire Jack Ma with Alibaba and Indian property tycoon, Jitendi Virwani.

“Two-thirds of the growth in Asia-Pacific is coming from entrepreneurs. We expect Asia-Pacific to add $27.8tn over the next five years, of which 70 per cent will be China and 15 per cent India,” Daniel Kessler, global leader of BCG’s wealth management division, said.

US remains far ahead with people worth more than $100mn

While billionaires and mere millionaires have propelled Asia higher in total worth, the United States remains far ahead in the amount of households worth more than $100 million with 5,201. China is second with 1,037, the UK third with 1,019 and India fourth with 928.

The creation of new “millionaire households” happened more quickly in the Asia-Pacific than anywhere else and by 2019, BCG predicts that Asia will be home to more than a third of the $222 trillion global total.

Japan, which accounted for $14.3tn of the world’s total financial wealth, has historically not been included in the Asia Pacific numbers.

“A strong ‘old world versus new world’ dynamic was observed, with the so-called new world growing at a far faster pace,” the report said. “By contrast, growth rates in all ‘old world’ regions remained in the single digits, led by Western Europe and North America, and with Japan lagging somewhat behind.” 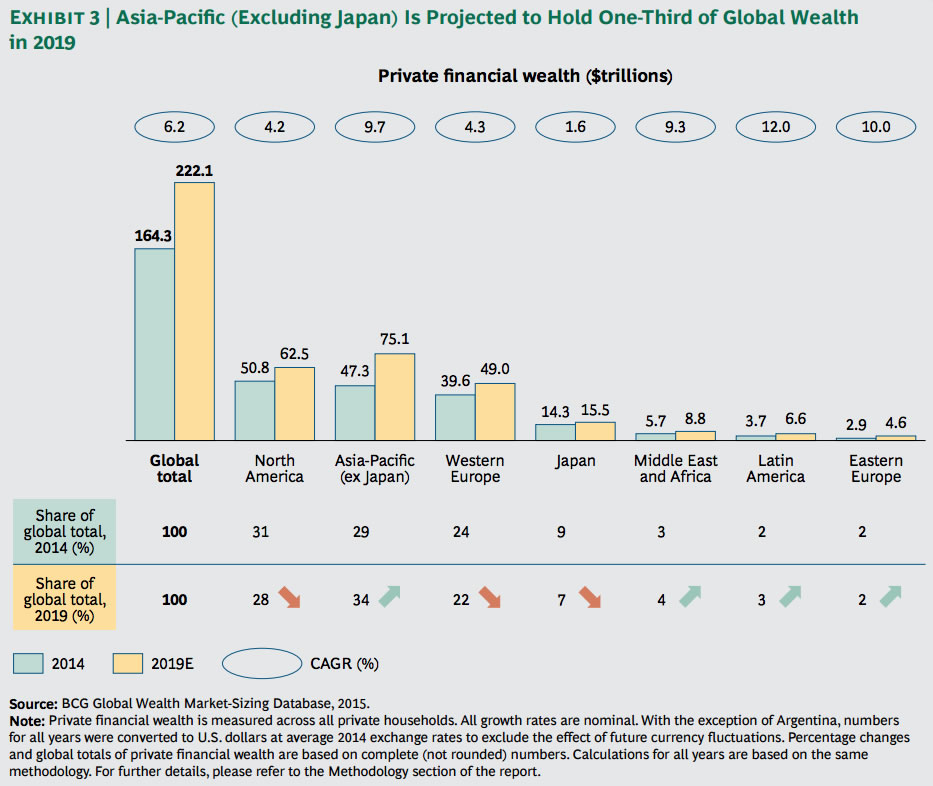