The pandemic has helped scale the adoption of online services.

“During 2020, the COVID-19 pandemic created a work-from-home environment that scaled the adoption of online services, including SVOD. The average number of SVOD services subscribed by customers outside of China grew through 2020, reaching 3.8 in Australia and Japan and 2.8 in markets such as India and Southeast Asia,” said MPA executive director Vivek Couto.

Couto added “While subscriber growth will decelerate in 2021 and the production of new content will remain impacted in 1H 2021, the scale and velocity of investment in premium content should ensure that net new customer additions will remain robust over the medium term. Moreover, profitability should grow more rapidly than revenues and subscribers as online businesses scale. This is particularly true in larger markets such as Australia, China, Japan, and Korea.”

“In the emerging markets of India and Southeast Asia, the landscape for SVOD is promising but is still being shaped because of growing competitive intensity with increased investment in content and distribution. Theatrical windows are narrowing for online video operators while key genres are moving rapidly and exclusively online.”

“Mobile plans and low ARPU pricing are becoming common to drive affordability, reach, and customer adoption across large pre-paid consumer segments. ARPUs will remain compressed as platforms scale in markets such as India and Indonesia. The future will also see more distribution deals with mobile, fixed broadband, pay-TV, and smart TV operators to drive consumption and payment on small and big screens. Evolving regulations may impact content creation and investment as governments look to introduce censorship and impose content quotas.”

China’s unique SVOD subscribers are projected to grow from 298 million in 2020 to 375 mil. in 2025. Driven by ARPU expansion, China’s SVOD revenues are forecast to grow at an 11% CAGR between 2020-25. While mobile consumption of content initially drove VOD demand, big screen TV consumption is an increasingly important driver of demand. ARPUs will climb with greater consumption of VOD.

In Japan, SVOD overtook AVOD as the larger revenue contributor in 2020, accounting for 56% of online video revenues in Japan. Net SVOD subscriber additions reached a record 8.9 million in 2020, driven by WFH conditions with Netflix emerging as market leader. In Korea, SVOD revenue doubled in 2020, driven by Netflix. New entrants in Korea in 2021 will include Disney+, which will join Softbank-owned Coupang, which is expanding its video offering.

In Australia, SVOD grew rapidly with revenues climbing an estimated 32% in 2020 to US$1.4 billion Netflix leads the market with 6.1 million subs and ~US$710 mil. in revenue. Nine’s Stan is the second-largest player with 2.3 million subs while Disney+ and Amazon Prime Video have 1.8 million subs each.

Southeast Asia’s SVOD future will largely be defined by the growth of Indonesia, the Philippines, and Thailand while Vietnam has significant long-term potential. Indonesia’s SVOD industry made significant strides in 2020, with key global, regional, and local platforms investing to make SVOD more accessible to the largely mobile mass market.

YouTube is the dominant player with ~60% of total AVOD revenue in Asia Pacific ex-China. The platform is a destination for promotional clips and often entire episodes of professional content in Korea, Japan, and Southeast Asia.

China will remain the largest AVOD market in the Asia Pacific. In 1H 2020, the COVID-19 pandemic led to steep budget cuts and a flood of digital ad inventory associated with ByteDance and Kuaishou depressed CPMs. A broader macroeconomic recovery has since boosted the sector. ByteDance is the largest AVOD operator in China.

In India, YouTube dominated AVOD with an estimated share of 67% in 2020. Its contribution is forecast to decline to 55% by 2025 as broadcaster-backed OTTs (i.e. Disney+ Hotstar, Zee5, SonyLiv, and others) and short-form video platforms gain share.

In Korea, YouTube and Facebook had more than 75% of AVOD revenues in 2020. Kakao and Naver are important domestic platforms for advertising. Kakao is capitalizing on the success and scale of its instant messaging platform Kakao Talk to launch Kakao TV, which debuted in Q4 2020. Korea’s AVOD revenues are expected to more than double in the future to reach with local players’ share reaching 30%, up from 23% in 2020.

In Southeast Asia, key local TV broadcasters transitioning to online will shape the future AVOD opportunity. Local and regional platforms’ share of AVOD revenue is expected to grow in the future driven by platforms such as Viu, Vidio, RCTI+, and Line TV.

Advances in broadband will continue to boost online video reach, consumption, and monetization. MPA projects mobile broadband penetration, including 5G, in Asia Pacific ex-China will reach 86% (per capita) by 2025 versus 66% in 2020, with key growth from India, Indonesia, Thailand, and Vietnam. 5G penetration will grow rapidly in China, Korea, Japan, and Taiwan.

Average fixed broadband penetration in the Asia Pacific is forecast to grow from 61% to 64% of households over 2020-25. Networks are being upgraded using fiber and next-generation cable technologies. OTT partnerships with telecom and broadband pay-TV operators can be vital for reach and billing, particularly in markets with limited online payment mechanisms. Their marketing clout and knowledge of end-user behavior can be influential Partnerships range from carrier billing to hard bundles with a fixed fee component to revenue shares.

According to MPA analysis, 13 online video operators accounted for more than 70% of Asia Pacific online video revenues in 2019, generating US$21.1 billion in aggregate. Bytedance, Tencent Video, and iQIYI remain strong in China and have expanded globally with Tencent Video’s WeTV and iQIYI slowly making inroads into Southeast Asia. Netflix has built a strong business in the Asia Pacific, on the back of growing success in Japan, Korea, and Australia Amazon Prime Video is successful in India and Japan and is growing in Australia. 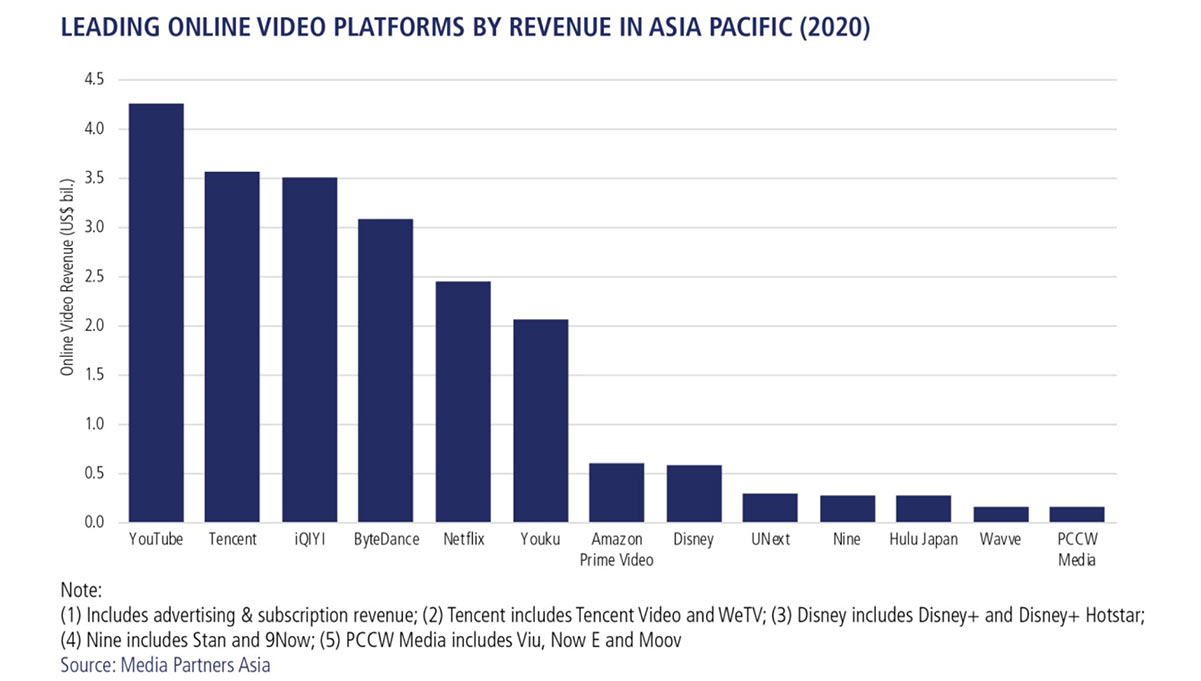 Disney’s global SVOD expansion has been a success to date. Its subscribers in India are low-ARPU but the platform could secure more than 80 million subscribers in India if it can retain key sports rights and continue to invest in local originals. The launch of Disney+ Hotstar in Indonesia has met with early success especially in terms of reach and paid subscribers.

The core Disney+ service has succeeded in Australia and New Zealand and is growing in Japan. These markets will benefit from the launch of Star (as part of Disney+) in 2021 as access to series and movies from ABC, Fox, and FX brands should help drive customer growth.

Local broadcasters have moved online or are licensing to key OTT players, and in some cases, doing both. Southeast Asian regional major Viu has grown its SVOD business with Korean content and local acquisitions. In Indonesia, Emtek’s Vidio has passed 1 million paying subscribers with premium local content and sports rights.

Line TV is Thailand’s largest AVOD platform after YouTube and Facebook. In Korea, a number of local platforms compete including Wavve, TVing, Coupang Play, and Kakao TV Talk. In Australia, the most significant local player is Nine Entertainment, which owns and operates two OTT platforms – 9Now (AVOD) and Stan (SVOD).

Digital Media Industry Projected to Grow to $292B Value in 2021

Singapore Brings in Business of the Future